Shortly after crashing out in a heap in the season opening round of the 2022 Monster Energy Supercross Series at Angel Stadium in Anaheim, California – an accident that resulted in two broken arms and an immediate ambulance ride to a local Orange County emergency room – Colt Nichols posted the following Instagram message:

Life  doesn’t always make sense, but we must get back up and keep going. Just like my championship post said last May – To Hell And Back – because I’ve overcome far too much to stop now. Appreciate all the messages and support more than you can imagine. – Colt Nichols

After winning the 2021 AMA 250SX East Region Supercross Championship, Monster Energy/Star Yamaha Racing team racer Nichols entered the ’22 season supremely confident and in the best racing shape of his six-year career. The Anaheim shunt put an immediate end to all of that.

Now, Nichols is still working at getting back into the Lucas Oil Pro Motocross Championship.

Q: You’ve been out of action since the opening round of the new season back at Angel Stadium in January. Being an injured racer in this sport can be tough, as the racing world just never stops spinning.

COLT NICHOLS: That’s just the way the sport is in general: Out of sight, out if mind, you know? That’s kind of the unfortunate side of it all. When you’re injured you’re not being seen or heard, and all of that is tough. People forget about you really quick and you’re only as good as your last race and mine, unfortunately, ended with me taking an ambulance ride. That was really unfortunate.

Overall, though, I’m doing really well now. I started riding about two weeks ago. I’m just trying to shake some rust off and I’m trying to get back in the swing of things slowly. That was a very long time off of the bike. Five months is the longest stint I’ve been away from the bike in a really long time. So I’m just taking it nice and easy and I’m trying to come back at my own pace. The team has been patient with me and has not been trying to rush me into doing anything, so that’s been nice.

Yeah, just enjoying the process right now. I’m just trying to get a little better each time that we’re out and I’m just enjoying riding my dirt bike. Life is perspective, you know? For me, it was one of those things where it was high and low, and we are battling that constantly. I had a really, really good off-season before the new season started, so I was pumped coming into the 2022 season. Things just didn’t work out the way I wanted them to. You know that’s motocross and it’s cruel sometimes, but at the end of the day I know my ability and I’m happy with how I’ve been able to handle everything and to try and respond and come back. The only thing that I can really do is to get back up on the horse and go again.

It does suck, but I’m not going to hang my hat on it and be super bummed-out and play the ‘what-if’ game. At the end of the day I got injured and I missed the races, and that’s just part of the sport. I’m motivated to get back to that level of where I was and hopefully I can even go beyond that. I’m moving to the 450 class next year and that’s exciting and something that I’m looking forward to. It’s going to be a fun change of pace, getting up there and mixing it up with the big boys. I’m excited with where I’m at. There is a lot of progress to be made yet and I am making progress each time I get on the bike and that’s exciting to see. It’s been really fun so far.

Q: You have had quite a few ups-and-downs along your career trajectory. You’ve also talked about the reality that nothing worth happens comes easy. All relatable at this point in time, huh?

CN: Yeah, nothing good is easy. It’s always been tough. Sometimes I wish it was easy, but that’s just not really the way that life is. It’s going to be tough and difficult, but that’s what makes me appreciate all of the highs that you get along with all of the lows and the peaks and valleys along the journey to the ultimate end goal that you want: to one day retire and to look back on your career and just be like, ‘I gave everything I had every time I had the opportunity to give it.’

That’s really all you can do. Regardless of the results or how things go or how you want them to go, it happens they way it is going to happen and all I can do is try and focus on the present and be happy and content doing what I’m doing. I’m always pushing harder to try and be a better athlete and to be a better person on a daily basis. That’s about all I can do.

Q: On the eve of the 2022 supercross season you talked a lot about the “overwhelming feeling of wanting to experience winning another championship again.” That’s you in 2022 and beyond, isn’t it? You really do desperately want to win again.

CN: Yes, it was kind of funny. Before the ’22 season everyone was describing the feelings of the ’21 season and preparation for the ’22 season and all that stuff, and it was really weird. It was like this crazy and insane motivating factor for me, because doing it once is one thing, but to go and try and win races and be a championship guy again is something that was just so motivating. It was like, ‘I want to go and this again so badly that I’ll do anything to do it again.’

That is the attitude you have at first in trying to get it, but once you have had it, for me, I was like, man, I want to get that feeling again so bad. I was willing to do anything. It got cut short this year, but that’s life. That stuff happens, and my motivation is still 100-percent there to get back to that level and back to a guy that can win races and can be a championship contender. That’s what I’m working to do now. I’ve been on a nice little road to recovery for a while now and I’ve been training really hard for the past few months in preparation for riding and hopefully racing in the future. I don’t know when. I have no idea for a return to racing, but whenever that time comes, we’ll be ready, for sure.

It’s still early, you know? We’re only about two weeks into riding now, so as far as returning? It’s really too early to even really give an idea yet. I kind of have an idea in my head, but at the same time, I don’t know if that will correlate into actually being able to line up and go race. It just really depends on the progression of me riding day-to-day and with how the wrist is doing. As of now, the wrist is handling everything really well. It gets a little sore and stiff at times, but that’s just what happens with any injury.

I’ve been enjoying it, though. That’s pretty much the biggest key. I’m having fun. Even the days that are tough now, I try to do some motos. You’re tired and your exhausted, but it’s still fun, man. It’s a lot better than sitting on the couch, that’s for sure. Hopefully, we’ll get back to racing sooner than later, but I have no idea of what that will be.

CN: Still a little too early. We’re negotiating stuff and trying to get things handled. I’ve actually started working with Jimmy Button. Jimmy is a really, really good dude and a straight shooter. He’s just an all-around good guy. I wanted him to help me do this kind of stuff from the agent-side. He stepped up and has been a huge help for me. We’re trying to get something done. It’s tough, man. The 450 class is a hard field to try and navigate, but I’m doing all that I can do to help and he certainly is too, so hopefully we’ll land somewhere. Don’t know where yet, but we’ll end up somewhere. 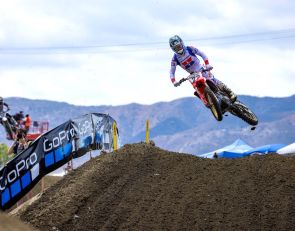