Renger van der Zande completed a 50-minute fuel-saving stint, having taken over from co-driver Sebastien Bourdais, to deliver the No. 01 Chip Ganassi Racing Cadillac DPi-V.R a victory at Belle Isle in the IMSA WeatherTech SportsCar Championship.

RETWEET to congratulate the @IMSA winners from the final @detroitgp on Belle Isle!

The DPi race was split into those who opted for one-stop strategies and those who pitted twice. While van der Zande was squeezing every drop of fuel out of the No. 01 Cadillac, Pipo Derani in the No. 31 Whelen Engineering Racing Cadillac DPi-V.R was on a charge through the field after the team opted for a two-stopper.

This left the No. 01 Cadillac, the No. 60 Meyer Shank Racing Acura ARX-05c, and the No. 02 Chip Ganassi Racing Cadillac DPi-V.R, who were all on the same one-stop strategy, exposed to a hard-charging Pipo Derani.

Derani turned a 34s gap to the leader into a 1.633s gap in just 45 minutes. While the Brazilian was able to reel in the leading and fuel-saving trio, passing them was a different story. Earl Bamber in the No. 02 Cadillac, who was defending the final step of the podium, made contact with the No. 31 Cadillac on two separate occasions.

While Derani eventually did manage to pass Bamber, his attempt to pass Oliver Jarvis in the No. 60 Acura at Turn 12 fell short and left him open to Bamber’s advance. While Derani, Bamber, and Jarvis scrapped, van der Zande managed the pace from the front of the field.

The top three in DPi would go on to cross the line within 0.8s from one another.

“It’s a beautiful day. I’m soaked so that’s a good thing,” van der Zande said after jumping into Belle Isle’s fountain. “I think at the end I had to make it a bit more exciting with all this fuel saving so I had everybody bunch up behind me and have a go with each other.”

The No. 60 Meyer Shank Racing Acura of Tom Blomqvist and Jarvis finished second and moved into the lead of the DPi championship. Bamber held onto third for himself and Alex Lynn. The No. 31 Cadillac of Derani and Olivier Pla finished fourth but was moved to the back of the DPi finishing order after being found underweight in post-race tech.

The No. 10 Wayne Taylor Racing Acura ARX-05c also opted for a two-stop strategy but made their first stop later than the No. 31 Cadillac, leaving the Acura at the mercy of traffic that, costing them dearly. The WTR crew would go on to finish fifth before the No. 31’s penalty, ahead of the No. 5 Mustang Sampling Cadillac DPi-V.R.

This was the second win of the season for van der Zande and Bourdais.

The No. 17 Vasser Sullivan Lexus of Ben Barnicoat and Kyle Kirkwood spent the first stint behind the No. 27 Heart of Racing Aston Martin of Roman De Angelis. De Angelis had gained the lead on the race’s opening lap after passing Kirkwood.

The 100-minute race was an easy one-stop for the GTD cars, and the entirety of the field came down for service and a driver change almost as soon as the window opened. The No. 27 Aston Martin pitted from the lead of the race, one lap before the No. 17 Lexus. Each team elected to take left-side tires only, but the No. 17 Lexus had a quicker in- and out lap.

After leapfrogging the No. 27 Aston Martin, Barnicoat led the final hour of the race with no other changes to the running order. De Angelis and Ross Gunn settled for second, where they started, and Bryan Sellers and Madison Snow in the No. 1 Paul Miller Racing BMW M4 GT3 settled for third, also where they started.

“We just raced smart, raced clean, and [I] saved as much fuel as I possibly could which put us in a position to do an undercut which worked perfectly,” Kirkwood said. “Awesome job by the guys in the VasserSullivan group — having a very speedy pitstop which got us out there in the lead. Everyone knows track position is crucial around this place, especially in a GTD car.”

For the first time in the history of sports car racing at Belle Isle, the race was completed without a full-course yellow. The No. 57 Winward Racing Mercedes AMG GT3, which had crash damage, and the No. 51 Rick Ware Racing Acura NSX GT3, which had a mechanical gremlin, both retired from the race. The No. 96 Turner Motorsports BMW M4 had to serve a penalty for changing tires after qualifying and had to make an unscheduled stop for a loose wheel; they finished 14th and last of those still running. 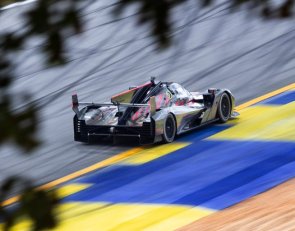