Every year at the Indy 500, at least one multi-car team is guaranteed to be short on speed and big on questions as to why it was so wide of the mark. So far at the 2022 edition of the event, Rahal Letterman Lanigan Racing has been that team as the trio of Graham Rahal, Jack Harvey, and rookie Christian Lundgaard continue to search for what’s been missing since practice started on Tuesday.

Saturday’s qualifying session added further illumination to RLL’s struggles as Rahal was the best of the three in 21st place at 230.766mph in the No.15 Honda.

If Rahal was displeased with his starting position for the Indy 500, Lundgaard and Harvey were shocked to end up 31st and 32nd in the field of 33. Only Stefan Wilson, who failed to make a qualifying attempt, was slower than the Dane’s 227.053mph average in the No.30 Honda and the Briton’s 226.851mph run.

As one wag in the IMS media center noted after qualifying concluded, both drivers who were bumped from the Indy 500 field in 2021, A.J. Foyt Racing’s Charlie Kimball who set a 227.584mph average, and Top Gun Racing’s RC Enerson who ran a 226.813mph, were either faster or almost on par with the two RLL entries that will start from the last row.

“It’s no secret we’ve been struggling for pace,” Rahal said. “The speed just isn’t there. So clearly, we want more. We want to go faster than that and we’d like to be further up the grid. We know we can race to the front, but to race to the front from the back is not where we want to be.”

Stuck with the speeds recorded during their first runs, inclement weather prevented the RLL drivers from making additional runs to try and move forward on the starting grid.

“We did the warmup [Saturday] morning and honestly the car felt pretty good,” Harvey said. “We came into qualifying probably thinking we weren’t going to make the top twelve but at least have a better showing than that.

“I feel like the track temp has gone up [since the start of qualifying] and it’s gotten a little more windy and our car seems to be more sensitive to that. We wanted to make another run but the weather prevented that two different times.”

Despite the frustrations that come with starting well removed from the head of the field, Rahal has earned a reputation as one of the NTT IndyCar Series’ strongest race-day performers. Simply put, if the RLL cars can find more speed in the remaining practice sessions, look for the No.15 Honda – and possibly his teammates – to go on a passing spree over 500 miles next Sunday.

“I do think that we can move forward in the race; I think our race cars are very strong,” Rahal added. “Clearly, we’d like to qualify a lot further forward than that but it just wasn’t in the cards today. We will put our heads down and focus on the race now.” 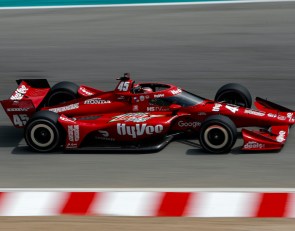