Max Verstappen is a fan of Formula 1’s expansion in the United States and is looking forward to a “pretty crazy” event at the Miami Grand Prix.

The inaugural race in Miami takes place at the Miami International Autodrome around the Hard Rock Stadium this weekend, marking the second American race on the calendar. With Las Vegas also set to join in 2023, F1’s push to grow the sport in the States is moving quickly, and the defending world champion is enjoying the approach.

“I think this weekend is going to be pretty crazy!” Verstappen said. “I’m looking forward to racing in Miami — I’ve driven the track on the simulator and we’ve practiced and prepared as much as we can without visiting the track in real life.

“I love racing in Austin, so it’s fun that we get to go to another state and race this year. It’s exciting to see Formula 1 getting much bigger in the U.S. — F1 and the teams are working hard to promote the sport in the U.S. and we’re having more and more races here, so step by step we are making it more popular.

“I also think it helps now the cars are finding it easier to follow and overtake each other and more teams are competing for wins — I think that’s the most important thing for the fans. I hope that it’s going to be an exciting weekend. Miami is a really nice city and I think it’s a really interesting location to hold a grand prix. I think not only the drivers are excited, but the fans too.”

Verstappen’s Red Bull Racing teammate Sergio Perez has always enjoyed big support in Austin so close to his native Mexico, and is expecting similar in Florida as he feels he’s in a position to fight for victory given his strong start to the year.

“It is great that the calendar is expanding more in America, which is a lot closer to home for me and one day I might end up living there!” Perez said. “It is a great market for Formula 1 and I am sure there will be a lot of Latin Americans and Mexicans at the race, so hopefully I get a lot of support and it will be a very important race for the team both on and off the track. These busier races are hard to manage but the team do an incredible job at making sure Max and I can focus on our driving.

“I am now fighting for poles and podiums every week, which is great motivation to keep pushing and keep focus. I just want more week after week, and I am looking forward to seeing what we can do in Miami.” 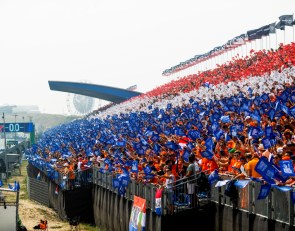