The first day of IndyCar’s Indianapolis Open Test started 90 minutes late due to rain and ended 30 minutes early due to concerns over a slippery track surface that saw three drivers spin while exiting the pits.

Three drivers spun exiting pit lane, with Alexander Rossi starting the sequence just seconds into the test with a harmless spin. Hours later he was followed by Helio Castroneves, who wasn’t as fortunate after shooting across Turn 2 and hitting the wall.

Will Power closing the pit-exit rotational adventures when he slid onto the grass at the apex of Turn 1 as Colton Herta was bearing down on the same piece of track. Herta spun at more than 200mph, touched the outside of Turn 1 with the rear attenuator and continued spinning towards the inside of Turn 2; Marcus Ericsson was lucky to escape Herta as the Andretti Autosport car crossed in front of his Chip Ganassi Racing machine before nosing into the inner wall. Herta jumped from the car uninjured.

The call to stop the test came after Power’s incident made it apparent that something was amiss with the track surface after a new sealant had been applied.

“When we started today, I thought it was (slippery) just because the track was green and you go out, it’s really cold, but as the day progressed actually, it didn’t get any better,” 2013 Indy 500 winner Tony Kanaan said of the problematic pit-exit section. “I know they sealed the track and the apron; the track has no issue. But the apron seems that something is wrong with it. I think it was the right call. You don’t want a car shooting up the track. I don’t know what the solution is going to be for tomorrow, but it’s obviously a little bit concerning.”

With the grip issues limited to the exit of pit lane, Kanaan suggested a simple adjustment by having the drivers go through the section at a reduced pace, and said the curious absence of grip there “shouldn’t prevent us from running tomorrow.”

All first-time Indy 500 drivers passed their Rookie Orientation Program runs, and with the green light to participate in the closing session of the day, Juncos Hollinger Racing’s Callum Ilott got a taste for raw speed as he used a big run behind other cars to place the No. 77 Chevy third on the scoring chart (226.308 mph). 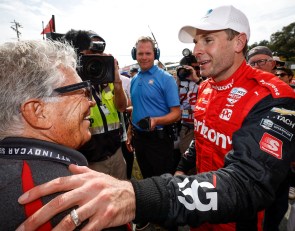 Power gets pole No. 68 at Laguna Seca while title rivals falter