The RS1 team of Eric Filguerias and Stevan McAleer (No. 18 Porsche) picked up Easter Sunday morning where they left off the day before — atop the podium as overall- and class winners, completing the weekend sweep at Sonoma.

McAleer took the first stint, recording the CrowdStrike Fastest Lap with a time of 1m47.022s. Following a smooth pit stop where Filguerias stepped into the driver’s seat, the Porsche cycled smoothly back into the lead to finish with a 13.466s lead over second-place overall finishers Gavin Sanders and Michai Stephens (No. 34 Conquest Racing/JWF Motorsports Mercedes AMG).

“It’s all of the hard work the RS1 guys put in. He (Stevan) gave me a really great car and a great position. He worked his butt off that first stint to give me the opportunity to just drive it home,” said Filguerias after the win. When asked about the car’s advantage over the field, he said the Sonoma track has high tire degradation and credited the Porsche with being nimble and lighter versus the heavier cars.

Third in the Silver class were Austen Smith and Zac Anderson (No. 51 Auto Technic Racing BMW). Rounding out the top five in class were the No. 68 Smooge Racing Toyota followed and the No. 112 Dexter Racing Toyota, respectively.

In Pro-Am, the No. 15 BSport Racing Aston Martin team of Bryan Putt and Kenton Koch also swept their weekend with another class win and solid third-place finish overall.

“Everybody on this team has a passion. We really care for each other and we work hard for each other,” said Bryan Putt. “A lot of hard work for a lot of hard hours to even put us in the position to start the car and to bring it home and win it for the team is really good stuff,” he added.

Co-driver Kenton Koch credited Putt for having one of the best drives of his life. “The level of competition is quite high, there are a lot of people here, and I can’t get over how good this guy (Putt) did! We’re definitely starting this year out strong,” he added proudly.

Following the BSport team in second place was the No. 50 Chousest Povoledo Racing Aston Martin Vantage and the No. 47 NOLASPORT Porsche in third. Completing the top five in class were the No. 39 Cameron Racing Mercedes-AMG, and the No. 120 Premier Racing Team Porsche.

Making a winning debut at Sonoma in the Am class were Ben Anderson and Matt Rivard in the No. 60 Dexter Racing Ginetta.

“The car really worked well on the track and it really lends itself to this style of car. We were able to preserve the tires and get a strong finish even though we started in the back of the class, with patience and consistent driving moving through the field,” said Rivard.

Placing second in the Am class was the No. 36 BimmerWorld BMW team of Charlie Postins and James Clay (BMW M4 GT4) followed by the No. 032 GMG Racing Porsche in third, No. 98 Random Vandals Racing BMW and No. 7 NOLASPORT Porsche rounding out the top five.

There were only a couple of incidents that impacted cars on track during the one-hour race. The No. 19 NOLASPORT Porsche experienced a suspension issue in the breaking zone, making contact with the No. 32 Capstone Motorsports Mercedes-AMG and taking both cars out of contention. The No. 19 will serve a 10-grid position penalty at the next event.

In a separate on-course incident, the No. 899 Absolute Racing Porsche got into the side of the No. 52 Auto Technic Racing BMW while working through corner traffic, also taking both cars out of the race. The No. 899 car will serve a five-grid position penalty at the next race. 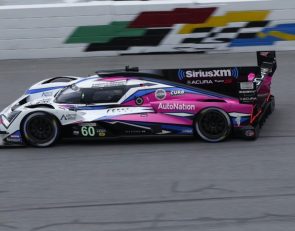