Important progress has been made with the new-for-2023 LMDh and GTP models, with the first example of the spec energy recovery system that will be used in every car recently debuting on-track.

RACER has learned Porsche’s five-day test at Circuit de Barcelona-Catalunya in Spain that took place in mid-February also provided ERS suppliers Bosch Motorsport and Williams Advanced Engineering, along with the ACO, FIA, and IMSA sanctioning bodies, an opportunity to log miles with the unit in the back of Porsche Penske Motorsport’s hybrid prototype. Porsche declined to comment on the topic.

Kept under wraps by all involved, the private debut for the 40hp device is said to have gone exceptionally well, with only one minor stoppage taking place as it worked in unison with the twin-turbo V8 that powers the Multimatic-built sports car.

With the rest of the LMDh/GTP manufacturers months away from the start of their respective testing programs, Porsche was the obvious choice to assist with the system’s on-track debut while Acura, BMW, and Cadillac push to get their first cars ready for summer outings.

Combined, the Bosch motor generator unit and Williams battery will work with the various internal combustion engines in the LMDh/GTP formula to reach a peak of 680hp. 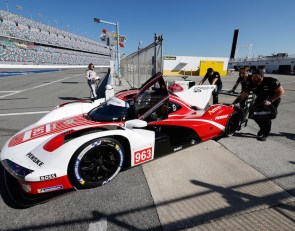