Sometimes, when caught up in the relentless news cycle, I find myself imagining how someone a few months earlier might have reacted to a recent story if they didn’t have the benefit of knowing what’s happened since.

This week gives me a couple of prime examples.

Think back to June of last year. If you were to see the headline that Kevin Magnussen was returning to race for Haas in 2022, or that Imola was being guaranteed a spot on the Formula 1 calendar for another four seasons and Russia would never feature again, you’d know something pretty big had happened in the gap in between.

You don’t need me to get on my high horse when it comes to my stance on what the FIA should be doing around Russia’s invasion of Ukraine, and I’ll let you make your own minds up about Nikita Mazepin’s comments from earlier today, but there’s a genuine excitement around the fact that Magnussen has been chosen to replace the Uralkali-backed youngster.

There are a number of drivers who you feel have had their time in F1. It’s not to say they’re not good, or wouldn’t be valuable to certain teams, but when they drop off the grid you want them to go and excel in other categories as much as you want them to return. Drivers like Romain Grosjean and Nico Hulkenberg fit that bill: drivers who had some good offers and opportunities that didn’t always work out, but you also didn’t feel they were particularly unlucky.

If either got another seat in F1, they would do a very good job and be an asset to a team. But in Magnussen’s case there’s a sense that his career never got a fair chance. His first year at McLaren started so brilliantly in Melbourne and he delivered some very solid drives as a rookie in a team with huge expectations, but not the car performance to match.

Political infighting became the much bigger story at McLaren and Magnussen eventually lost out when a stellar line-up of Jenson Button and Fernando Alonso was selected, despite the team not being in a position to deliver a competitive car to either world champion.

So Magnussen waited for a chance that never came and eventually had to head to a Renault team that was very much in the rebuilding phase. Comfortably outperforming his teammate Jolyon Palmer, Magnussen was again a victim of a team that didn’t have a clear direction, and the lack of a multi-year contract offer led him to make the switch to Haas.

It was only at Gene Haas and Guenther Steiner’s team that he felt properly valued for the first time in F1, and the results were clear to see in the first two years. But then the team got 2019 wrong, COVID nearly forced it to close in 2020, and Magnussen was forced out late in the year through necessity – Haas needed funding – rather than choice.

I must admit, when I sat down with Magnussen in Bahrain at the end of 2020 and discussed his move to Ganassi, I genuinely sensed a weight had been lifted from his shoulders. He had a chance to go and compete for wins and big results that had been so missing for a number of seasons in F1. He’s a true racer who feeds off being competitive, and that’s all he asks of any team he drives for.

But his fatigue was with F1, not with Haas itself. He retained a really good relationship with the team despite the struggles, and remained highly-regarded by those he’d worked with. So when Russia invaded Ukraine and Mazepin’s seat funded by Uralkali was no longer tenable, the Dane was top of the team’s wish-list. And it’s easy to see why.

Magnussen is already well-known and well-liked within the walls at Haas, which will streamline his reintegration with the team. Andy Hone/Motorsport Images

There were some good rookie options that might have brought money, not least Oscar Piastri if Alpine was willing to provide some funds. But Piastri would have been a short-term fix, and a line-up consisting of two drivers managed by other teams does not provide stability.

Pietro Fittipaldi has also impressed the team whenever he’s driven the car and proved to be a solid pair of hands in very testing circumstances when substituting for Grosjean in 2020, but there were more experienced names available that were tough to overlook.

When it came to those options, Antonio Giovinazzi would have gone down well with Ferrari, but the Scuderia already has what it wants in Mick Schumacher at Haas, and also has Giovinazzi on standby as a reserve alongside his Formula E role. Plus, Giovinazzi’s biggest asset might have been being a known quantity for Ferrari to benchmark Schumacher against. Haas has the same thing with Magnussen, so the Scuderia will still learn a lot about the German youngster.

Hulkenberg was also interested, but at 34 he’s five years Magnussen’s senior, and doesn’t have an existing relationship with the team. With the deal only having been finalized a day before the final pre-season test, that last aspect is an important one. Things like the seat, procedures and equipment are all easier to adapt to with a driver who spent four of the past five years racing for Haas.

But while I might be pleased to see Magnussen back, I won’t let him get away with the comments he made at Daytona earlier this year. At the time he said any future moves would be taken only with the chance of fighting for victories in mind, and that he would rule out a return to F1’s midfield on that basis.

Either he’s being hypocritical by taking this seat, or Haas is set to challenge for wins this year. I’ll ask him…

In all seriousness, it’s still the right move for Magnussen. Faced with the reality of being able to return to F1 so soon after leaving, and still in his 20s, means he has the chance to progress from this point. He could quite easily do a couple of years with a more competitive Haas and gain a move to an even more attractive seat, or take advantage of F1’s new era to build something with the American team as it emerges from its latest crisis.

To that end, he’s also helping out Haas at the same time, providing it with an experienced, proven and reliable driver who is popular within the team at a time when it is facing a number of issues. By getting Magnussen back in, integrating an unknown quantity is no longer one of them.

It’s a shame from a Ganassi point of view that Magnussen won’t be fighting for race wins in the States this year (unless we see something outrageous in Miami and Austin), and similarly, he was was the headline act in a strong Peugeot WEC line-up, so it’s understandable that the Hypercar project was slightly reluctant to let him go. But he will still have a lot to offer both categories in the future, and hopefully his racing enjoyment of the last 12 months will prompt him to return at some stage.

For now he’s got a second chance nobody thought was coming but is fully deserved, and Haas has got probably a better option than it could have hoped for at such short notice. Now it just needs to get its car running at the test… 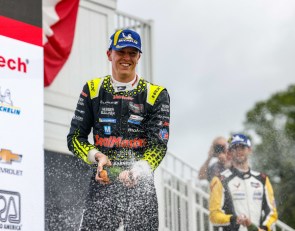