NBC Sports has announced a significant upgrade to its broadcast plans for IMSA’s WeatherTech SportsCar Championship.

With the upcoming end to NBC’s dedicated sports cable outlet NBCSN, IMSA will have all of its 2022 WeatherTech Championship events hosted on the big NBC network or its USA Network cable channel. From the two outlets, 80 hours of programming will be offered, with 12 hours reserved for NBC across the Rolex 24 At Daytona, WeatherTech Raceway Laguna Seca, Canadian Tire Motorsports Park, and Petit Le Mans.

Another significant change will also be found with the shuttering of NBC’s IMSA TrackPass streaming solution. Starting next year, NBC says its streaming service Peacock “will serve as the streaming home of the IMSA WeatherTech SportsCar Championship with live, flag-to-flag coverage of all races airing on NBC and USA Network, as well as exclusive streaming coverage for portions of a variety of endurance races, including the Rolex 24, Twelve Hours of Sebring and Petit Le Mans. Including coverage of the IMSA Michelin Pilot Challenge and IMSA Prototype Challenge series, NBC Sports will present more than 100 hours of IMSA coverage in 2022.”

NBC’s increased commitment to IMSA follows a similar pattern demonstrated with other racing series carried by the broadcaster.

“We’re thrilled to showcase the incredible racing of the IMSA WeatherTech SportsCar Championship in 2022 and kick things off with the iconic Rolex 24 At Daytona,” said Michael Perman, vice president of programming, NBC Sports. “With more coverage than ever before on the NBC broadcast network, the inaugural season of IMSA on USA Network and comprehensive live coverage on Peacock, IMSA fans won’t miss a minute of the action.” 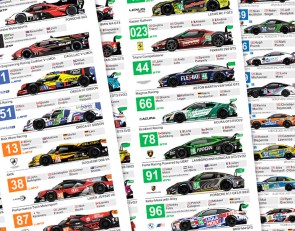