Circuit of The Americas played host to Round 7 of the W Series Championship late on Saturday, with the fast, flowing and undulating circuit challenging the all-female single-seater drivers. The first installment of this season’s doubleheader finale saw Veloce Racing’s Jamie Chadwick in dominant form.

Chadwick arrived in Austin tied on points with season-long rival Alice Powell, but blistering pace throughout both of Friday’s practice sessions to top the time sheets on each occasion. She backed up her initial speed with two sensational laps in qualifying. A revised format meant that Chadwick’s fastest lap was good enough for second on the grid for Round 7 and her second-fastest lap will see her line up on pole position in Sunday’s season finale.

As the lights went out, Chadwick got off the line superbly to hold the early lead from Abbi Pulling. Emma Kimilainen seized the advantage into Turn 1, however, diving up the inside of the British duo, before gearbox troubles hindered her corner exit. Chadwick didn’t need to be asked twice and masterfully ducked under both of her competitors to claim the lead and she didn’t look back.

The 23-year-old began to stretch her legs following the Turn 1 tussle and duly opened up a gap of 2.5 seconds while the chasing pack battled for position. At the 15-minute mark, Kimilainen closed to within 1.5s of the Veloce car but the reigning champion quickly responded with the fastest first sector of the race and ensured her rival was kept at arm’s length, while continuing to manage her tires for the remainder of the race.

“I’m really happy with that result. Starting second and obviously having Alice behind me, I wanted to make the most of that opportunity,” said Chadwick. “To get the start we did and to follow it up with this result is great but the hard work starts tomorrow!

“I’m in a position where I can’t afford to take any risks so when I saw Emma coming up the inside I was a bit hesitant, but thankfully it paid off and got us a nice gap at the start. It was just managing the tires — it’s quite tricky with the rear temperatures but fortunately we managed to hold on and get the win. The championship was always going to go down to the wire but I’m starting on pole tomorrow so we’re in the right position.”

Powell started deep in the field after having mechanical issues in qualifying, but charged up finish third and stay within 10 points of Chadwick heading into today’s season finale. She set the fastest lap of the race in the closing stages to close on polesitter Pulling, and when the rookie ran wide at the end of the penultimate lap, Powell pounced to overtake her on the final circuit.

“Qualifying and practice were a nightmare for me, but starting so far back gave me the mindset of having nothing to lose. As Daniel Ricciardo says, it was about licking the stamp and sending it,” said Powell. “I had great pace in the race so a big thank you to everyone at Racing X for working so hard to get me sorted and in the right frame of mind. A great race and hopefully there’s more to come tomorrow.”

Although she needed the points, Powell admitted to feeling a little guilt about denying Pulling her first podium result.

“Abbi and Sarah [Moore] were pretty nice to me but I’m gutted to take that podium spot from Abbi at the end. She’s got another front row start tomorrow so hopefully she improves again,” she said.

After an epic second season, it's time for our final race. 🤠

With ten points now separating the title contenders, you won't want to miss this. 👊

Link below to find out where you can watch from. ⬇️#WSeriesAustin 🇺🇸 #WSeries #F1 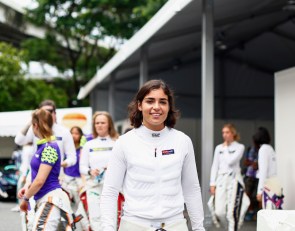