The survive and advance mentality of the NASCAR Cup Series playoffs continues to work for Brad Keselowski. The former series champion is one of the eight drivers still left with a shot at competing for the championship, having made it out of a messy day at the Charlotte Roval. Keselowski finished 20th in the elimination race despite spinning twice in the backstretch chicane and needing minor repair work to his Ford Mustang. His name was up and down the leaderboard throughout the afternoon.

But while the good news for Keselowski is that he’s still in the playoffs, the bad is that the Round of 8 kicks off with two 550-horsepower tracks of Texas Motor Speedway and Kansas Speedway, and Keselowski has been open about those races being tough for the Ford camp.

“I think we can legitimately run fifth, maybe 10th, on those tracks and that next round, that’s not good enough,” Keselowski said. “You have to run top five. In a perfect world, you win one of those races. So, certainly, we have work to do there.”

Keselowski and the No. 2 team have put in a lot of work to get to this point. It hasn’t been the strongest postseason runs for Keselowski’s group, but their execution to earn top-10 finishes has kept them in the hunt. Charlotte was Keselowski’s worst run through six races in which he’s also earned four top-10 finishes.

Cup Series teams did not run a 500-mile race at Teas earlier this year because the track hosted the All-Star Race in the summer. But Keselowski finished second in the 100-lap exhibition race, and he was third at Kansas back in May.

“My team has been so good all year with respect to the pit stops and all those things, and they’ve kind of carried us in so many different ways,” Keselowski said of the 550 races. “But we haven’t had that race-dominant speed. If we can find that, we’ll be a really tough team.”

Competition director Travis Geisler acknowledged this week it’s fair to say that the organization hasn’t been the cars to beat or where they want to be.

“I think we also look at it as we have some really experienced, veteran people that have gotten through playoff situations, and there’s a lot of crazy stuff that goes on, and I would look at how we’ve executed to this point,” Geisler said. “I’m really impressed with how our teams have done. … Nobody really feels like we’re the ones that are going to come out and be challengers for this thing, but I think that’s also how we kind of got it done with Joey when we did (in 2018).

“These next three races have to be perfect for us. We’re not going to be able to make mistakes and recover with just pure speed. We’re going to have to execute perfectly.”

Team Penske is the only organization with all of its cars still championship eligible. That’s a surprise to some, especially with Keselowski in what is considered a lame-duck situation given that he’s leaving the team at season’s end. All three drivers — Keselowski, Joey Logano and Ryan Blaney — have won races this season.

“I’m hoping for big things at Texas, Kansas, and Martinsville — three tracks that we’re run really well at in the past,” Keselowski said. “I’m hopeful for big things.” 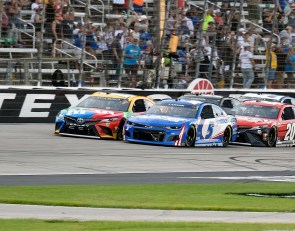