The word “Roval” isn’t in the dictionary, and you’ll see as much when you try to search for it through Merriam-Webster or putting the word in Google. However, if you go the Google route, you’ll be given the “see results about” option on the right-hand side. There are two listings: Bank of America Roval 400 and Charlotte Motor Speedway. Three years since its debut on the NASCAR schedule, the part road course, part oval course is synonymous with Charlotte.

But even after three years and 327 laps, drivers and teams are no closer to having figured the place out. The second elimination race in the postseason, the Roval is still considered a challenge and a wild card race.

“Look at the (expletive) show Indy was, right? Yeah, Rovals are awesome.”

While William Byron has come to learn to enjoy the course, he does understand where Busch is coming from. Byron busted out a “herky-jerk” phrase when talking about “parking lot tracks” like the Charlotte Roval or Indianapolis. Places that don’t have much of a rhythm.

Multiple playoff drivers used the word “narrow” to describe the Roval when the question about why it was considered a wild card or challenge was posed. But almost all of them explained that the 2.28-mile course leaves no room for error compared to other road courses.

“It’s just a narrow track that is fit into a tiny space,” said two-time Roval winner Chase Elliott. “When you have that, there is no room for error. There is no run-off room. If you blow a corner, you’re probably going to hit something. If you go off the track, you’re probably going to get sucked into the wall with the way the grass lays. Everything about it is not forgiving in any sense.”

Take Watkins Glen. If a driver has an issue or blows Turn 1, there is plenty of run-off room to get righted again. Drivers either spin on the paved area or go wide before rejoining the course.

“You don’t have that anywhere at the Roval,” Elliott continued. “The only corner that is forgiving is the last little chicane, as far as not hitting anything. But you’re still in a lot of trouble because you have to stop and give your time back (if NASCAR deems you to cut the corner).”

Elliott thinks a driver can find a rhythm at any track, regardless of the challenge. But the edge to step over what’s comfortable is a little steeper at the Roval.

Brad Keselowski disagrees. The former series champion, who has never won on a road course, doesn’t believe a driver can ever get comfortable at the Roval.

Busch only feels comfortable when the field gets spread out.

“Restarts? No,” he said. “You’re wondering when you’re going to get hit next.”

The course has 17 corners and elevation changes. Martin Truex Jr. calls it “unique” with the task of tackling the tight infield course and the high-speed banking of the oval. It means crew chiefs have to pick and choose their setup items to be faster off some corners versus others.

Tire fall-off at the Roval isn’t as bad as other courses, but it’s enough to be a big deal. The tires get hot and lose grip.

Joe Gibbs Racing crew chief Adam Stevens of Christopher Bell’s No. 20 team described the focus on power down off slower corners earlier this week. Stevens and Bell rode on trams with the media around the Roval and pointed out some of its nuances. Stevens admitted that it’s not easy to prepare a car for the Roval even after a few races there.

“Being that you have some notes to look at, you know what worked for you, what didn’t work for you,” Stevens said. “You didn’t have that when you first started (in 2018), and the racetrack went through a couple of small iterations that actually affect a lot of things.”

One such iteration is the backstretch chicane. In its first year, drivers figured out they could stay on the throttle and go through the chicane almost straight, and some, like Darrell Wallace Jr. and Erik Jones, crashed in practice at the tire barrier at corner exit. Officials went to work making it more of a left-right-left layout.

Stevens cannot stress enough for a driver to stay off the eight-inch turtles in the backstretch chicane. With the way a driver goes into that chicane almost head-on, hitting them will end your day with the damage they do to the car.

Bell views the Roval as just another road course with tight, slow corners that bunch the field up. Unlike traditional ovals, Bell said it’s easy to get caught up in someone else’s mess or mistake.

“That’s probably why it’s a wild card,” he said.

There were nine cautions in last year’s race, but only one for an accident between Austin Dillon and Kyle Busch. The others were the stage breaks and cars stalled on the course. The 2019 race featured 10 cautions, and the inaugural event had eight, including one memorable multi-car accident in Turn 1 when Brad Keselowski led the army off the cliff.

“I think we have a better idea of it now,” said Ryan Blaney, who won the first Roval race. “Four years ago, when we first had it, we’re like, what the hell is this? It’s crazy. We didn’t know. Now, I feel like we have a better understanding of it but at the same time, it’s still a road course in the playoffs. A tough road course, too, because there is no run-off. If you go off the track and slip a tire or something, you’re going to be in the fence. You’re stuck in the grass.

“If Road America or COTA were in the playoffs, everyone would say the same thing (about it being a wild card). But that place is tough … I spun out there last year leading the race. Luckily, I didn’t hit anything, but it ruins your race. I think any different track is a wild card, but we have a better understanding of what the Roval is all about now.”

If a driver starts pushing too hard, the Roval will bite back hard. Alex Bowman noted how easy it is to get yourself in trouble or overdrive a corner, recalling the car he tore up in practice in 2019.

“You have a lot of mistakes from people you may not normally see,” Bowman said. “Maybe similar to how at Darlington it’s easy to tear up a race car. The Roval falls into that category.”

A tight course. Easy to make mistakes. Getting caught up in someone else’s issue. Turtles. If all of that wasn’t enough, Stevens added the idea of it being a wild card also comes from being at the mercy of when the cautions fall and how it dictates race strategy.

“There are lots of variables here, more so than the other road courses,” said Stevens.

The Roval can’t be defined because it’s a one-of-a-kind challenge, and no matter how many races run are there, it might always be a wild card. For Stevens, after questioning why NASCAR and Charlotte made the switch to the course in the first place, it’s become a suitable event.

“There is a fair amount of chaos, and it’s definitely penalizing if you make a mistake,” Steven said. “But it’s legit. And I think it’s here to stay.” 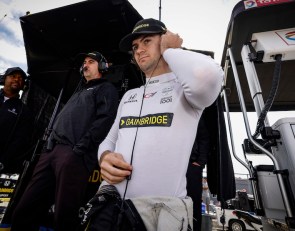 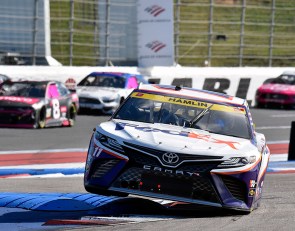 INSIGHT: Hamlin has all of the momentum – and none of the spotlight