Petrov took his first Cooper Tires Pole Award of the season after setting the pace in qualifying this morning. He made full use of it by maintaining his advantage at the start over Rasmussen, who started second. Behind, Eves, who was the only rival with a realistic chance of wresting away the title from Rasmussen, had his work cut out to remain ahead of a hard-charging Reece Gold (Juncos Hollinger Racing), from Miami, Fla.

Petrov and Rasmussen traded fastest laps during the early stages before the Russian encountered a momentary electrical glitch in Turn 1 on the eighth lap which caused him to slow abruptly and enabled Rasmussen to sweep past into the lead. Petrov recovered quickly and kept the pressure on until Rasmussen reeled off two successive fast laps to extend his advantage to 1.7s with only six laps remaining.

Unfortunately, Petrov was afflicted by the same issue twice more in the closing stages, costing him any chance of chasing down Rasmussen, although the Dane eased off on the final lap to secure victory by an unrepresentative less than half a second.

“This is such a relief,” Rasmussen said. “It’s been such an intense season — there are so many good drivers out there and the series is so competitive. I didn’t get a perfect start today; Braden got a good run and I think we touched wheels so it’s good that we all got through cleanly. It’s hard to pass here, so I just waited for an opportunity. Petrov slowed into Turn One and I grabbed the spot and I cruised from there.

“I knew the championship was about done. I rarely get emotional but this one got me a little bit. Winning in my rookie season, with a rookie team, is a huge accomplishment. I’m so happy for (team owner) Jay (Howard). We’ve been together for so long, and to go back-to-back shows how much of a team sport this really is. But for me, winning the scholarship is huge, life changing. We’re so grateful to have the chance to earn these scholarships, you don’t see that anywhere else in the world. It gives drivers like me the chance to keep racing.”

In addition to virtually wrapping up the championship, Rasmussen snagged a seventh PFC Award for Jay Howard as the winning car owner.

Eves was chased throughout the 25-lap race by Gold, but even that wasn’t enough to keep him within striking range of the championship with just tomorrow’s race remaining.

“Tough race. This is a very physical track, and pushing from behind makes it even more so,” Eves said. “It’s a bummer but we’ll rebound and try to finish the season on a high note tomorrow and pick up a win in the rain. It’s been a tough season; a lot of things didn’t go our way. But Christian did an incredible job so congratulations to him. The entire Cambridge Exclusive Autosport team did an incredible job all year and the team championship is very deserving. But all things considered, it’s been a good year, coming back after last year. Second place isn’t all that bad. I’m proud of our accomplishments. Hopefully I can put something together for next year.”

There was some consolation for Michael Duncalfe’s Exclusive Autosport team for which two more podium finishes were enough to clinch a first Team Championship.

Christian Brooks, from Santa Clarita, Calif., capped an impressive Indy Pro 2000 debut by finishing a strong fifth for Exclusive Autosport after stepping up from USF2000 for the first time. He finished just over one second shy of Gold while remaining under intense pressure from Jacob Abel (Abel Motorsports), from Louisville, Ky., and New Zealander Hunter McElrea (Pabst Racing).

A seventh-place finish certainly wasn’t what McElrea had in mind after taking two wins and three additional podium finishes from the five most recent races, but it still represented a good effort after a disappointing qualifying session this morning left him mired in 10th on the grid. McElrea’s rise to seventh earned him both the Tilton Hard Charger Award and The Ticket Clinic Fastest Lap Award.

One more qualifying session tomorrow morning will set the grid for the 18th and final race of the season at 11:00 a.m. EDT. 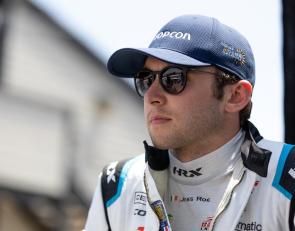