More than $3 million in prizes and scholarships will be up for grabs when the 2021 season of Road to Indy Presented by Cooper Tires competition concludes this weekend, October 2-3, with a return visit to the Mid-Ohio Sports Car Course in Lexington, Ohio.

The Road to Indy is unique in the world of auto racing, offering scholarships at every level to enable talented young race car drivers the opportunity to progress from the grassroots of the sport to the NTT IndyCar Series and the Indianapolis 500.

After winning successive USF2000 and Indy Pro 2000 championship titles and scholarships in 2018 and 2019, Kyle Kirkwood, from Jupiter, FL, was obliged to take a one-year sabbatical in 2020 when the Indy Lights series was placed on hiatus as a result of the global pandemic. But now he is back, and on a mission to make another assault on the history books. He currently holds a slender 15-point advantage over fellow American David Malukas, from Chicago, IL, in his quest to add the Indy Lights crown to his burgeoning resume.

A maximum of 64 points are available from the two races which will comprise this weekend’s VP Racing Fuels Grand Prix of Mid-Ohio Presented by Cooper Tires. At stake is a scholarship valued at almost $1.3 million to ensure the champion a guaranteed three NTT IndyCar Series races in 2022, including the 106th Indianapolis 500.

Kirkwood, 22, already has won more Road to Indy races than any other driver – a total of 30 in just 48 starts for a remarkable strike rate of .625. No one else has even come close. Prior to the 2021 season, a total of 1,739 drivers had started at least one race in either USF2000, Indy Pro 2000 or Indy Lights dating back to 1986. Of those who have made starts on all three levels, Matthew Brabham has the next best strike rate at 0.383, with 18 wins from 47 starts. Greg Moore and Jack Hawksworth are tops among those to have contested two of the three series at just under .400.

Just to cement his status as championship favorite, Kirkwood has yet to be beaten at Mid-Ohio. He secured a hat-trick of USF2000 wins in 2018, added two more wins in Indy Pro 2000 the following year, then swept both Indy Lights race wins earlier this summer.

Kirkwood is aiming to become the third successive driver from Andretti Autosport to win the drivers’ championship after Pato O’Ward (2018) and Kirkwood’s close friend Oliver Askew (2019). He vaulted to the top of the standings by virtue of wins in each of the last three races, including a sweep at WeatherTech Raceway Laguna Seca, in Monterey, CA. But Malukas, who celebrated his 20th birthday on Monday, has pushed him every inch of the way, winning seven times for HMD Motorsports.

Malukas’ fine form, allied to that of Global Racing Group with HMD Motorsports stablemates Linus Lundqvist, from Stockholm, Sweden, and Danish-born Benjamin Pedersen, from Seattle, Wash., who hold third and fourth places in the standings, has ensured that a first coveted Team Championship is virtually within HMD’s grasp.

Global live streaming can be found on the Road to Indy TV App and at RoadToIndy.TV and indylights.com as well as REV TV in Canada.

The Indy Pro 2000 title, plus a scholarship valued at over $700,000 to ensure graduation to Indy Lights in 2022, will be decided in this weekend’s VP Racing Lubricants Grand Prix of Mid-Ohio Presented by Cooper Tires double-header. After 16 out of 18 races, Denmark’s Christian Rasmussen (Jay Howard Driver Development) holds a narrow edge over local driver Braden Eves (Exclusive Autosport), from New Albany, OH.

Rasmussen had a shaky weekend last time out in New Jersey, claiming one third-place finish and a pair of disappointing ninths. Consequently, his relatively comfortable 32-point advantage has been trimmed to just 18 points heading into the decisive final weekend.

Eves and Rasmussen are the past two USF2000 champions, with Eves taking top honors in 2019 and Rasmussen earning his own title in 2020. Eves, who has won three races this season, has rebounded from a difficult 2020 campaign which was cut short by an injury sustained in a crash at the Indianapolis Motor Speedway road course.

Both title rivals have enjoyed success previously at Mid-Ohio. Eves secured his maiden Indy Pro 2000 victory – from the pole position – last year, while Rasmussen won five out of eight USF2000 races over a two-year period, and added an Indy Pro 2000 triumph from the double-header this past July.

The hottest driver at the moment in Indy Pro 2000 is Hunter McElrea, who has won two of the past five races for Pabst Racing, book-ending a trio of podium finishes. The streak has hauled him to within 27 points of Eves in the title-chase.

Reece Gold (Juncos Hollinger Racing), from Miami, FL, and Eves’ teammate Artem Petrov, from Saint Petersburg, Russia, also are comfortably in contention for a top-three finish in the standings.

This weekend also will see the return of former British F3 Champion Enaam Ahmed, from London, England, who recorded a trio of top-six finishes, including one fastest race lap earlier in the year. Ahmed will pilot a second Juncos Hollinger Tatuus PM-18.

In addition, Christian Brooks, from Santa Clarita, CA, will step up for the first time from USF2000 to Indy Pro 2000 with Exclusive Autosport after scoring two victories earlier in the season, and recent Formula Regional Americas race winner Jordan Missig, from Channahon, IL, will make his Road to Indy debut with Pabst Racing.

The Indy Pro 2000 schedule almost precisely mirrors that for Indy Lights, with 30 minutes of practice at 4:00 p.m. on Friday providing the precursor to the first of two qualifying sessions at 10:20 a.m. on Saturday. Race 1 will see the green flag at 2:05 p.m., with a second qualifying period at 9:30 a.m. on Sunday setting the starting order for the 18th and final race of the season at 1:10 p.m.

Global live streaming can be found on the Road to Indy TV App and at RoadToIndy.TV and indypro2000.com.

The title outcome for the first rung on the Road to Indy ladder, USF2000, also remains undecided heading into the final weekend, although Kiko Porto, from Recife, Brazil, holds a commanding 49-point advantage, 368-319, with a maximum of 66 points still to be claimed. The series champion will earn a scholarship valued at over $401,000 to ensure graduation onto the next step of the ladder, Indy Pro 2000, in 2022.

Porto’s team, DEForce Racing, also holds a comfortable 40-point margin over Pabst Racing in the quest for its first Road to Indy Team (and driver) Championship.

Porto, 18, has been a paragon of speed and consistency this year, securing more wins (four), top-five finishes (13) and pole positions (six) than anyone else. He is the only driver to have finished among the top 10 in every race and one of six drivers to have completed all 349 laps during the 16 races thus far.

A total of eight drivers representing five teams have scored at least one win and no fewer than 11 have posted a fastest race lap heading into this weekend’s Cooper Tires USF2000 Grand Prix of Mid-Ohio Presented by VP Stay Frosty.

Michael d’Orlando, 19, from Hartsdale, NY, still harbors hopes of claiming the title after winning three times this year for Cape Motorsports – including taking the checkered flag in two of the three races at Mid-Ohio in July – but he will likely need to rely upon some misfortune for his Brazilian rival.

Fellow USF2000 veteran Yuven Sundaramoorthy, from Delafield, WI, holds third in the points table after winning three times for Pabst Racing, ahead of teammate Josh Pierson, from Wilsonville, OR., who hopes to claim his first victory to go along with five podium results.

The fight for Hyperco Rookie of the Year honors will go down to the final weekend. Spike Kohlbecker (Ignite Autosport with Cape Motorsports), from St. Louis, MO, holds a seven-point edge over Pabst Racing’s Jace Denmark, from Scottsdale, AZ.

Global live streaming can be found on the Road to Indy TV App and at RoadToIndy.TV and usf2000.com. 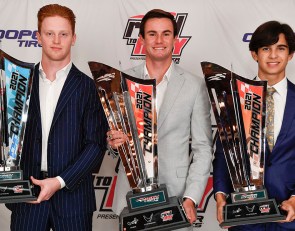