Despite a weekend at Barber Motorsports Park that featured horrendous weather and difficult racing conditions, the 2021 MotoAmerica Superbike Series ended as it should have with Jake Gagne winning a record 17th race to put an exclamation point on a season like no other.

Gagne, who earlier in the season set a record with 13 straight wins, didn’t win his record-extending 17th race in a row in Saturday’s Race 1, and he didn’t win it in Race 2 on Sunday morning, but he did take that 17th victory in the season finale on Sunday afternoon at Barber Motorsports Park.

How’s this for a season? Twenty starts, 17 victories, 18 podiums and 445 championship points. That was Gagne’s year with the Fresh N’ Lean Attack Performance Yamaha team as they simply scorched the competition in putting together a season that is unprecedented in AMA Superbike history.

The cherry on top is that Gagne’s victory in race three at Barber — the 17th of his season and career — on Sunday put him into a tie with Nicky Hayden for eighth on the all-time AMA Superbike win list.

“What a way to finish the year,” Gagne said after win number 17. “Yesterday was chaos. We all threw it down, but I couldn’t get it back up in time. The race earlier today, we weren’t too happy with it. We had some issues and we sorted it out and we were ready to go out there and try to win this thing in race three. Hats off to this team. It’s been an incredible year. Seventeen wins is unbelievable, especially against a field this deep and talented, these amazing teams. These guys are world-class riders. We did our work. We focused on what we needed to focus on and cranked out laps. I gave it my all every single lap of every single race, and it worked out most of the time. I feel blessed and I’m just lucky to have such a great crew, such an amazing motorcycle. I’ve had more fun than ever racing motorcycles, so life is good. It’s going to be nice to have a little break here, but we’ll be back to work and ready to keep fighting with these guys next year. It’s going to be hard to beat that year. Nothing but hard work to come and we’ll just keep chipping away.”

Westby Racing’s Mathew Scholtz had his best weekend of the year, despite crashing out of the lead but remounting to finish second in Saturday’s Mother Nature race. Scholtz made up for his Saturday miscue with his fourth career Superbike victory on Sunday morning (in a race that was stopped a few laps early when a deer ran across the wet track in front of Scholtz) and followed that up with a second-place finish behind Gagne in race three — another wet race — on Sunday afternoon.

“Yeah, I don’t even know what happened yesterday,” Scholtz half-joked after erasing that race from his memory banks with a win in race two. “I’m just trying to forget about that and just concentrate on what we do now. Pulled a pretty decent gap in the first couple laps. I definitely took some pretty decent risks in the more fast-speed corners, which I think definitely helped me open up the big gap. I tried to charge. At the halfway point, I had a couple decent front-end pushes, front-end wobbles. Also tucked the front in corner five. So, I kind of just chilled out, watched the board, and just tried to hold the six- or seven-second gap. I think with five laps to go, I was coming over the corner of 14, 15 there and a deer jumped out. I didn’t really think too much of it then, then I saw that the red flag came out and I kind of knew that I had won it there. Just a big thank you to the Westby crew. Yesterday was a difficult time for us. Kind of thinking with a 11-second gap, one and a half laps to go, I kind of screwed up big time there. It’s always
good to bring home a decent result afterwards.”

Warhorse HSBK Racing Ducati New York’s Loris Baz was also on the podium in both races on Sunday with a second-place finish in race two in the morning and a third in race three on Sunday afternoon. Baz doesn’t like to do things the easy way and his third-place finish came after a crash early in the race with an impressive fight back through the pack to follow.

“The start was not too bad,” Baz said after the final race of the season. “I actually got into P2 really early and Jake (Gagne) was pushing hard. I had a moment going into Turn 6 or 7, then Cam (Petersen) crashed. It was a bit of a mess. Jake already had a two-second lead on the first lap. So, I tried just to get a feeling on the bike. I was struggling a little bit, then I found a pace. I had a lack of rear grip, so I started to push on the front and then I just lost it into turn five. I managed to pick up the bike pretty early and restart it. I had an error message on the bike, and I could not turn it off. I had to reset the bike. So, I restart almost half a lap trying to reset all the buttons that I have on the bike. All the guys came through and finally the bike started to work again. When I went to neutral, it went into restart again. So, I just put my head down. I saw 13 or 15 seconds to the podium. I said, ‘Let’s do it.’ It would be bad to do another crash. I would have normally not cared, but I wanted to finish the season with a podium at least. I managed to get back pretty fast. So, it’s not what we wanted. I really wanted to finish the season a little bit better, but I gave everything I had. Big thanks to the team, all the guys, all the fans that stood in the rain, and MotoAmerica for this great season. It’s been nice to discover a new championship. Congrats to Jake (Gagne) for kicking our asses all season. He finished the same way that he started the season.”

With Scholtz, Baz and Gagne owning the podium in both races on Sunday, Saturday’s first-time winner Cameron Petersen was fourth in Race 2 on the M4 ECSTAR Suzuki, then crashed in Race 3, remounted and finished fifth, giving him a 1-4-5 weekend tally.

Jones Honda’s Ashton Yates came close to giving Honda a podium on his CBR1000RR-R in Race 3, but the Georgian gave up the spot late in the race to the flying Baz. Still, Yates had his best Superbike weekend ever with two fourths and a sixth.

Panera Bread Ducati’s Kyle Wyman ended his season with a sixth in Race 3 to go with a seventh in Race 2, the New Yorker finishing well clear of HONOS HVMC Racing’s Corey Alexander in race three.

M4 ECSTAR Suzuki’s Bobby Fong had a rough weekend and he ended it with two eighth-place finishes on Sunday. Altus Motorsports’ Jake Lewis wrapped up the Superbike Cup on Sunday and picked up his $25,000 check after finishing ninth in Race 3. Earlier in the day, Lewis had put his Stock 1000-spec GSXR-1000 into fifth. 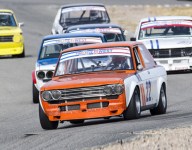