The motorsport world has rushed to pay tribute to long-time IndyCar writer and cherished RACER contributor Robin Miller, who died this morning after a long illness.

They broke the mold when they made Robin Miller. A lot of people didn’t understand Robin, and I didn’t either when I first met him. And then I come to find out he knew what the hell he was doing. Robin was one of the best writers there was, and he really called a spade a spade, and that’s what I respected about him.

I got to know him quite well, and I’m glad I did. He was a great friend. I don’t think there was another guy that loved racing as much as he did. The fact that he drove midgets and he knew what a race car was like, I think helped him be a great writer too. He knew what it took.

I’m awful glad I went to Indy to see him. We had lunch together and I stayed for the race, but I mainly went up there to see him. We had a good time talking about the old days. I know he suffered pretty hard the last two years, but man he was tough. He’s better off now, but I sure will miss him.

I learned more about the history of @IndyCar from Robin Miller than anyone else. This mans passion for the sport was infectious. I’ll miss his stories and presence at the track dearly. RIP. https://t.co/WaC2oj0ghs

Friend or foe, you always knew where you stood with Robin Miller.

And every open-wheel racing fan knew there were few who were more knowledgeable or passionate about our sport.

He will be deeply missed, and our thoughts are with his family and friends. https://t.co/Ga4trMJTvx

So thankful for all that Robin Miller has done for our sport. His wit and insight will be sorely missed. https://t.co/eDVHPk3R8G

Robin Miller you will definitely be missed. Thank you for all the laughs, my long donuts and your passionate for our sport! #RIP pic.twitter.com/Co0dzSedZC

So sad to hear Robin Miller has passed. He has done so much for me and the sport we all love. You’ll be greatly missed by the entire racing community. Wishing all of Robins family and friends prayers during this difficult time. pic.twitter.com/h0uQDj8CVq

With Robin’s passing, so goes a man with an unbridled passion for motorsports. His perspective as a driver led to his inimitable career as a print and television journalist. Never one to shy away from the harsh truth, Robin cared deeply for the betterment of our sport and every driver from the grassroots level to the pinnacle of competition. That’s what he lived for. He was a racer through and through and a wonderful and respected friend to all of us.

Farewell my friend. When "goodbye" is too hard to say, a hug will tell them what they need to know. Rest in peace Robin Miller. pic.twitter.com/IfPH2IVx9P

So sad of hearing the passing of Robin Miller. We have lost one of the great characters of auto racing. Prayers to his family. 🙏🏻 RIPRobin

Robin Miller was a passionate scholar and highly respected ambassador of our sport. His unique presence will be missed in media centers, paddocks and on pit lanes around the country.

Our thoughts and sympathies are with his family, friends and colleagues.🧡 pic.twitter.com/DwJQwLUtKY

RIP Robin. You were a legend. Straight Shooter and consummate professional journalist. There will never be another one like Robin Miller. A true original! It was always a pleasure working with Robin and his honesty. Godspeed to our friend today. pic.twitter.com/7v9mgwcYCI

Robin Miller, you left your mark on our sport. Your passion for INDYCAR was second to none. Thank you for your friendship and being you!

Racing has lost one of its most well-respected journalists and most beloved personalities. Robin Miller achieved his dream as his lifelong passion for Motorsports led him on a path to becoming the premier reporter in open-wheel racing. For more than 50 years, Robin covered the sport he loved with a fierce drive, a great sense of humor and uncompromising honesty. I know that Robin was truly touched by the support he received across the motorsports community over these last few months as he battled his illness. As many of Robin’s friends honored him and his legacy earlier this month when he was inducted into the Motorsports Hall of Fame during Brickyard weekend at the Indianapolis Motor Speedway, it was a fitting tribute to his life’s work at the place that meant the world to him.

Robin Miller’s passion and knowledge of motorsports was unmatched.

This was one of the last interviews Robin did with our team and it meant the world to us.

Thank you for all you have done for motorsports and fans everywhere. God speed, friend. ❤️ pic.twitter.com/dxlg9JcAs6

We are deeply saddened to learn of the passing of Robin Miller. Robin's passion for IndyCar racing was unrivaled, and his presence in the sport will be missed by everyone at Honda and HPD. pic.twitter.com/geykTD92kU

Robin Miller was a no BS guy who called it as he saw it. He had a passion for all motorsports and a deep knowledge to back it up. His sense of humor is what I loved and respected the most. He will most definitely be missed. pic.twitter.com/vuqcAEO1TU

Robin Miller simply cannot be replaced. Unafraid to speak his mind in any setting, and an unwavering commitment the sport and the life he loved. We should all aspire to live as honestly as he did. These have been tough weeks. RIP Robin.

Heartbreaking. Can’t say enough about Robin. His unrelenting passion for our sport was unmatched. Glad I had the opportunity to see and spend some time with him less than 2 weeks ago at his favorite place in the world, IMS. Rest In Peace my friend. https://t.co/KAETqHi6j6

It is a sad day for motorsports when you lose a racing icon like Robin Miller. The sport of Indy car racing was far better having Robin cover it. Nobody worked harder at covering the sport than he did and the beauty of Robin was that he told it like it is. He had a completely unvarnished take on everything yet he still worked hard at being fair and balanced. He is right up there with media legends like Chris Economaki and Bob Jenkins. I will sorely miss my friend Robin Miller.

Rest In Peace my friend. You were a true racing family legend. There will for sure be less laughing and sarcasm in the paddock. We’ll miss you mate. pic.twitter.com/k1MZvTvNok

The news of Robin’s passing is really sad. I’m grateful to have spent time with him over the years including a few weeks ago in Indy. pic.twitter.com/n3QidAeP9b

Sad day for the Motorsports community. RIP my friend, thank you for everything you did for Indycar. https://t.co/u6kYYzYOtX

Tough to put this one into words. Robin was the ultimate champion of our sport, a great friend and a true racer. He was such a fixture at the track that it won’t feel the same without him. Rest well, my friend.

It’s hard to imagine the racing world without Robin Miller, he was a source of solid information, I loved his passion and his concern for the racing community, RIP my dear old friend, you will be missed!!

Robin Miller was one of a kind and is irreplaceable- He had an amazing gift to see through the BS- He told me I wouldn’t last a year- 2 years later he wrote this- coming from him meant a great deal to me- Will forever be grateful for his friendship and support- RIP 🏁 pic.twitter.com/IVJtv2CI1p

Today we celebrate the love and dedication that Robin tirelessly gave our sport for so many years. Our thoughts are with his family and close friends inside and out of the INDYCAR paddock. pic.twitter.com/cHripz10Oc 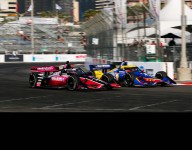