The 23-year-old made a perfect start from pole position and led all the way to the checkered flag, leading Powell by more than 10 seconds to complete a perfect weekend at the Hungaroring, where she topped all three sessions. Her second victory of the campaign puts Chadwick one point clear of Powell with half of the season’s eight races remaining.

Chadwick dominated Friday’s running, topping both the practice and qualifying sessions as she beat Powell to pole position. With overtaking notoriously difficult at the Hungaroring, the opening exchanges would be crucial.

Chadwick got off to a flyer of a start and led Powell by more than a second at the end of lap one. Sidorkova overtook Visser for fourth at the opening corner where Fabienne Wohlwend (Bunker Racing) lost her front wing after contact and was forced to pit, relegating her to the back of the field.

A series of fastest laps enabled Chadwick to double her advantage over Powell to more than two seconds after a third of the 30-minute plus one lap race. America’s Sabre Cook (Bunker Racing) had made up five places — going from 18th to 13th by the halfway stage — but, suffering with an issue with her mirrors, then lost a place to Miki Koyama (Sirin Racing). Wohlwend retired from the race with 12 minutes to go and Chadwick held a 4.5-second lead over Alice as the race entered the final third.

Koyama overtook Abbie Eaton (Ecurie W) for 12th position with less than five minutes on the clock after a prolonged battle during which the pair made contact on the run to Turn 3, an incident was being investigated after the race. With three minutes left, an error by Marta Garcia at Turn 11 put her under pressure from Kimilainen, who took sixth place two corners later, but that pair were under investigation by the stewards also.

With high track temperatures, tire management was a concern in the closing stages. But Chadwick was relentless at the front as she continued to set fastest laps and coolly took the fourth victory of her W Series career.

An epic win for @JamieChadwick, she led every lap from the start until the chequered flag. 🏁#WSeriesHungary 🇭🇺 #WSeries #F1 pic.twitter.com/4oO7tzVx1W

“I said before the race that it was all going to be about the start so, after getting off the line really well, I could relax after Turn 1 as I knew I had plenty of pace if I was ahead,” related the winner. “From there I could settle in and enjoy it as there were no safety car periods and I was able to just bring it home.

“This year, it’s difficult to be as consistent throughout the weekend with so many great drivers on the grid and the races coming thick and fast, so you have to be able to bounce back quickly from disappointment. That’s the nature of this championship and when you have the chance to score big points you have to take it, so I’m super happy with today and really excited for the second half of the season.”

After a four-week break, Chadwick’s bid to defend her W Series title will continue at the Spa-Francorchamps, Belgium, on Aug. 28.

P2 at the start, P2 at the end. 👊@alicepowell stood her ground a retained grid position earning herself another podium. #WSeriesHungary 🇭🇺 #WSeries #F1 pic.twitter.com/9UnsynYiRU 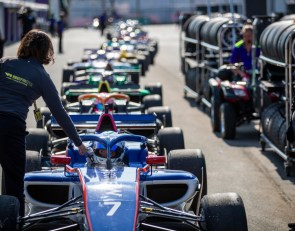