Colton Herta will remain within Michael Andretti’s motor racing empire for the foreseeable future. Herta, the most successful young driver in the NTT IndyCar Series with four victories since making his debut at the 2018 season finale in Sonoma, will continue piloting the No. 26 Gainbridge Honda with a new two-year extension.

“We’re excited to officially welcome Gainbridge and Colton Herta back to the Andretti Autosport family for years to come,” Andretti said. “Colton has already shown so much potential in the short time he’s been in the series, and having a great partner like Gainbridge recognize and support that potential is great for everyone. If the start to the 2021 season is any indication of the future success for the 26 car’s program, I think we have a lot to look forward to over the next few years.”

For Herta, who enters Indianapolis holding seventh in the championship – making him Andretti’s highest-placed driver ahead of this weekend’s Indy GP – extending the relationship with the team and sponsor was an obvious choice to make.

“I’m incredibly happy to be back with Andretti Autosport for the next two years,” he said. “I’ve grown so much with this team, so it was a no-brainer when I got the chance to re-sign with Michael. With the support of Dan Towriss and Gainbridge, there’s no doubt in my mind that we’ll be threats everywhere we go.”

The signing is also meaningful on the sponsorship side, with Gainbridge building upon its entry into IndyCar with Andretti in 2018.

“We are very pleased with our partnership with Colton Herta as he is a great ambassador for Group1001 and the Gainbridge brand,” Towriss said. “We are thrilled to extend our relationship with Colton and Andretti Autosport through 2023.” 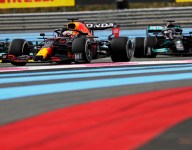