The Trans Am Series presented by Pirelli gets back into action this weekend as part of the rescheduled SVRA Atlanta SpeedTour, the original March event at Michelin Raceway Road Atlanta postponed due to the coronavirus pandemic.

The Nov. 19-22 doubleheader offers up a unique opportunity for Ohio-based driver Amy Ruman, who has found a second home at the challenging 2.54-mile circuit in her family-owned No. 23 McNichols Co. Corvette.

Following in the footsteps of trailblazers like Deborah Gregg and Lyn St. James, Ruman became the first female driver to win in the Trans Am Series at Road Atlanta in 2011. That victory in the season finale helped her place third in the final standings and begin a run that saw her finish in the top-three in six of the next seven seasons.

Ruman went on to win 16 races in her 14-year Trans Am career, including eight in 2015, the first of her two consecutive championship-winning seasons.

“Road Atlanta is a very special place for us because it’s the place where I won my first Trans Am race,” said the 46-year-old driver. “I was breaking barriers because I was a woman in the Trans Am Series, so there have been a lot of firsts.”

Finishing near the front has become a habit for Ruman at Road Atlanta. She won at the Georgia circuit in 2015, her fourth consecutive victory in a streak that began at the 2014 Daytona season finale. She won there again from the pole in 2016, beginning a two-race winning streak. She’s also finished second; third on three occasions; and fourth twice. Her lone finish out of the top five at Road Atlanta was ninth in 2018.

“Road Atlanta is a tough track,” she said. “You have to be consistent there, for sure. There are a lot of challenges there – especially the downhill Esses and the downhill coming onto the front straight.

“But overall, I think if your setup is good and the weather is good, you can do really well there.”

Trans Am racing is a family affair. Amy’s dad, Bob, joined the series at St. Petersburg in 1996, driving an ex-Paul Gentilozzi Chevrolet Camaro to a 10th-place finish – an impressive debut for a privateer. Bob competed in 95 career races, posting 30 top-10 finishes. He switched to a Corvette for Sebring in 2000, and ran that marque for the remainder of his career.

Ruman made her series debut with a seventh-place finish at Cleveland in 2005. She was at the wheel of a Corvette – the only car she’s raced throughout her 14-year career.

Ruman became the first woman to capture a pole position in only her third start – at Topeka, Kansas, during the abbreviated 2006 season – her first of five career poles.

“I’ve found a home in Trans Am,” she said. “We love it. We’re part of the Trans Am family, and I’m proud to be part of the Trans Am legacy. A lot of people jump around, but our team’s got so much invested in it. We know the cars – and these are cars that we like to run. There’s so much horsepower. They’re fast and fun to drive, and we love the format. We run 100-mile races, and we don’t need to have pit stops, fueling and a lot of crew members.”

Still going strong, Ruman began the 2020 campaign with a third-place finish at Sebring International Raceway, her 44th career podium finish. Since then, she’s finished second at Brainerd and third in the combined race at VIR. In her 118-race career, she has 77 top-five finishes, 77 top-10s and five poles in 118 starts.

“Our competition is getting pretty deep,” she said. “Trans Am is where it’s at – a lot of people are coming to our series and we’re (matched) up against a lot of top drivers, a lot of top teams. It’s very competitive, but that’s what makes it fun.

“For us, ‘bad’ is to take home a third or a fifth,” Ruman added. “Some people would love to get that. But once you start hitting the top three, you want to stay there. We’re up against a lot of good teams, but we want to stay relevant and put on a good show for the fans. We want to stay on the top.

The four-day event starts on Thursday, Nov 19 with testing, the weekend officially commencing on Friday, Nov. 20 with practice in the morning followed by qualifying in the afternoon starting at 4:50 p.m.

The combined class finale will take the green on Sunday at 12:00 noon ET.

The Atlanta SpeedTour is open to fans, and tickets are still available at SpeedTour.net.

All three races will be livestreamed starting Saturday on the Trans Am by Pirelli Racing App. 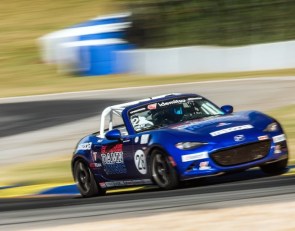