Mike Skeen was quickest in TA2 Powered by AEM. Other pole winners were Ken Twaits in the XtremeGT Lee Saunders, SuperGT; and Ken Harrell, GT.

After a pair of races on Saturday, all five classes will race together on Sunday. The grids for the combined event will be set by fastest laps for each competitor in Saturday’s races. All three features will be streamed live on the Trans Am by Pirelli Racing App.

Kerry Hitt held the pole for the opening minutes during the TA session in the No. 19 Advanced Composite Products Cadillac CTS-V before Said went to the top. Francis Jr. took over the lead at the midway point, and the two drivers began trading fast laps. Said prevailed in the brand-new No. 2 Weaver Racing/Techniques/SRI Performance Dodge Challenger, beating his own best with a final-lap time of 2m11.125s. Said won the second Trans Am race at VIR in 2002, and came back in 2019 to win last year’s event for Weaver Racing.

Said had no idea of who was fast in the session.

“I didn’t even have my radio on,” said the veteran. “I was just having fun. I had no idea about the pole until I got back to the truck, honestly. The new car just needs a few more laps. It feels real good. It’s an evolution. This is the third car I’ve driven for Pancho [Weaver], and they get better and better every time. I hope it’s dry tomorrow, but it was fun today.”

Francis Jr. settled for second, 0.668s back with a lap of 2m121.793s in the No. 98 One South Florida Wealth Advisors Ford Mustang. The 22-year-old six-time champion and current point leader was happy with second.

“Qualifying went very well for us today,” Francis said. “We got some practice time yesterday during our test sessions but didn’t run much today before qualifying. We didn’t want to risk the car in the wet on a doubleheader weekend. The car felt great and the rain setup we chose is one that has proven to be successful. Starting second should set us up well for the race tomorrow. I need to run a consistent race to get some good points to go into Sunday’s race.”

Chris Dyson will start third with a lap of 2m12.076s in the No. 20 Plaid Ford Mustang, followed by Simon Gregg in the No. 59 Derhaag Motorsports Camaro, and current championship runner-up Tomy Drissi in the No. 8 Lucas Oil Camaro.

Amy Ruman had contact with the guardrail in Turn 6 in the No. 23 McNichels Company Corvette, and Gregg went off and hit a barrier in Turn 14 late in the session. Both cars were driven back to the pits.

Mike Skeen captured the TA2 pole on his final lap, running 2m09.608s in the No. 77 LiquiMoly/Turn 14 Ford Mustang, edging out the No. 7 Silver Hare Racing Chevrolet Camaro of Rafa Matos by 0.127s. 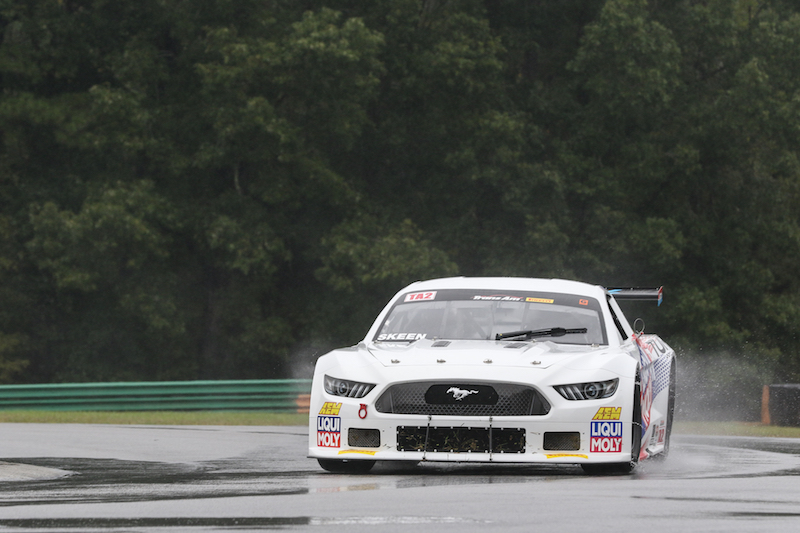 “We had very wet conditions so we knew visibility would be tough,” said Skeen, the TA2 points leader with three victories. “Getting space would be tricky because the spray lasts for a long time, which requires a larger gap than usual. As the session went on, the conditions improved with the fastest times coming at the end. We were battling the entire time and am very happy to come out with the pole today. The Stevens-Miller Racing guys put the LiquiMoly Mustang together great. They have worked through a few gremlins and gave me a car that I am happy we were able to put on the front row.”

Matos was looking for his second pole of the 2020 campaign, turning a best lap of 2m09.735s, but an electrical failure within the motor sent his Camaro into the pits prematurely. The drying track allowed Skeen to eclipse Matos in the final moments of the session.

“We decided not risk it going out in the rain for practice, so qualifying was my first session in the wet,” said Matos. “It was my first session in the wet and I spent most of the session learning the track in the conditions. Three laps in the engine died, and I spent the remainder of the session in the pits. We were the best car out there today. The car handled well and the track was drying so we were pacing faster every time around. We are a little bit disappointed, but the team is already working on diagnosing the issue to be ready for tomorrow’s race.”

“It’s going to be very interesting at the start tomorrow, because that will be the first dry lap for anyone here this weekend,” said TA2 competitor Tyler Kicera. “This has been the first time I’ve ever driven in the wet in a heavy car like my Carbotech Brakes Ford Mustang.”

Lee Saunders captured his third-consecutive SGT pole on his final lap of 2m16.093s in the No. 84 Landsearch LLC Dodge Viper. Mid-Ohio winner Mark Brummond took second on his final lap (2m16.298s) in the No. 24 SGT BMW E92 M3, demoting Adrian Wlostowski – who was on top for virtually the entire session – to third with a lap of 2m16.726s in the No. 96 F.A.S.T Auto Racing Mustang. 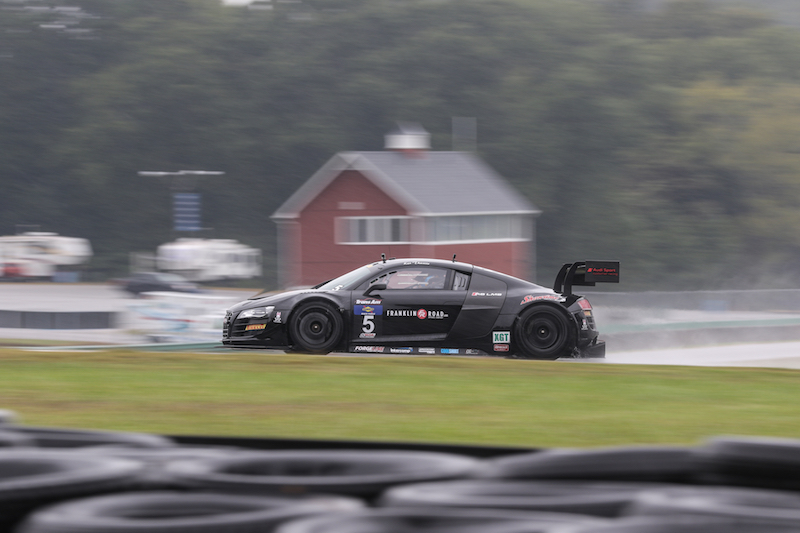 “It was really, really close for the three of us,” said Saunders, who leads the SGT standings with three victories. “We got a flier at the end. The track was finally coming around, with a ‘less wet’ line coming in. Tomorrow is going to be a flip of a coin. It’s not supposed to rain, so qualifying will be out the window. We’ll be on slick tires, so it’s going to be a reset.”

Ken Thwaits came out late in the session to score his third-consecutive XGT pole, running 2m16.607s in the No. 5 Franklin Road Apparel Audi R8 LMS. He was the lone XGT entrant to qualify.

Tim Horrell led GT in the No. 45 Breathless Racing Porsche GT4 Clubsport, earning his fourth pole with a lap of 2m18.700s.