Dale Earnhardt Jr. is a first-ballot NASCAR Hall of Fame member after being selected to the 2021 class announced Tuesday evening.

Earnhardt led the way with 76 percent of the votes on the Modern Era ballot. Joining him are the late Mike Stefanik, who won nine NASCAR championships; and Red Farmer, a three-time NASCAR Late Model Sportsman champion and the modified champion.

Voting took place virtually last week due to COVID-19 restrictions. The results were announced on NASCAR America on NBCSN.

On the track, Earnhardt won two Xfinity Series championships and 24 races. He is also a two-time Daytona 500 winner in the NASCAR Cup Series, where he scored 26 career wins. Earnhardt has also been an ambassador of the sport, selected Most Popular Driver 15 times, and being a car owner in the Xfinity Series, where his drivers have won three championships, as well as briefly in the Truck Series.

Mike Stefanik, a Modified Tour legend, will be inducted into the #NASCARHOF. pic.twitter.com/yusYRbt1oE

Considering Stefanik holds the all-time Whelen Modified Tour record in championships, wins, poles, top five and top 10s, it was well deserved when he was named one of its 10 Great Drivers in 2003. Stefanik also made starts in the Gander RV & Outdoors Truck Series, where he won Rookie of the Year during his full season in 1999.

Stefanik lost his life in a plane crash last September.

A member of the original Alabama Gang, what can be said for sure about Farmer is that he’s a NASCAR champion with an immense passion for racing. What isn’t known is just how many races he has won, but it is said to be north of 700. Farmer, who is approaching 90 years old, can still be found competing at short tracks in Alabama.

One more member of the Alabama Gang will forever be enshrined!

Congratulations to Red Farmer on being named to the #NASCARHOF Class of 2021. pic.twitter.com/4wxtVmudKq

Included as one of NASCAR’s 50 Greatest Drivers in 1998, Farmer made just 36 starts in the Cup Series but won three consecutive championships in the Late Model Sportsman division — which today is known as the Xfinity Series — from 1969-71. Those titles followed his modified championship from 1956.

Ralph Seagraves was named the recipient of the Landmark Award for his contributions to the sport. Seagraves, and executive with R.J. Reynolds Tobacco Company, was an essential figure in connecting Winston and NASCAR for the premier series to become the Winston Cup Series. 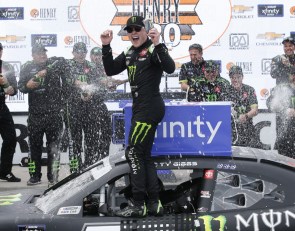