The Asian Le Mans Series has become the latest in the ACO’s portfolio to announce a heavily-revised calendar for the 2020/21 season in response to the COVID-19 situation. The series, which has seen growth in recent years, particularly in its LMP2 and LMP3 ranks, has focused on cost-saving measures with a new calendar that features just two circuits, but four races, in line with previous seasons.

Next season, the Asian Le Mans teams will visit Malaysia and Thailand, with two four-hour races at each, over a four-week period in January 2021. The 2020 races planned for Japan and China have been cancelled.

This is a smart move from Cyrille Taesch Wahlen, the series’ CEO. Racing in Asia is vastly different to racing in the USA or Europe, which in part is why such a radical change is necessary during the current pandemic. It will go a long way in easing the logistical and financial hurdles everyone involved will face when racing resumes.

In terms of travel, teams move from circuit to circuit during the Asian Le Mans season via sea freight, making the logistics of ensuring each team and its equipment arrive at each circuit on time a real challenge. By halving the number of venues, the teams will benefit from a reduction in cost (estimated in conversation with RACER by teams to be anywhere between 80,000 – 120,000 euros). It’s hard to weigh up the cost definitively because freight costs can fluctuate wildly.

“Sometimes the costs spiral,” one former Asian Le Mans Series team manager told RACER. “I remember one year it went bananas, with the price rising like 70% compared to the year before. There seems to be no logic to it, no way to forecast far in advance, which is a real challenge when you try to budget for a gentleman driver.”

Another team owner with experience racing in the Asian Le Mans Series explained to RACER that any logistical issues that arise from freight during the season, such as delays, can have a domino effect that teams have to spend their way out of.

“Freight companies don’t guarantee your freight actually getting to the destination,” they said. “In Suzuka, one time we arrived and our freight had left with plenty of time, but got offloaded in Singapore and they didn’t realize it got lost – they only realized when the shipment arrived at Suzuka without our car. So who pays the cost of getting the car to the track now? You have to pay more to get shipped as a priority, even though it wasn’t your mistake.”

In addition, this change reduces the potential headaches caused by travel restrictions into next year, too. The Asian Le Mans Series attracts a variety of European teams and a notable selection of drivers from the USA, as well as the contingent of teams based within Asia that take part year-on-year. It is not yet clear how easy it will be for teams, drivers and the series personnel to get to certain countries by the end of this year and into the next, so minimizing the amount of travel required will go a long way in giving the those who wish to compete the confidence that it’s going to be possible and cost-effective.

“The tough part has been because the situation has changed so many times, day after day, week after week for almost three months, knowing that at some point you really want to make a decision,” Taesch Wahlen told RACER. “That has to serve the interests of a series promoter and your customers, the teams and their gentlemen drivers and the whole paddock.

“We have been, of course, in contact with Japan, China, Malaysia, Thailand. It would have been great for us to go to Suzuka (as was originally planned), for the first time and it would have been nice to go to Shanghai after that, and have this four-country calendar that we designed which was already quite condensed over 60 days.

“But when you feel that you will not be in the position to guarantee anything really safe and optimistic for months, then we decided to make the decision to go down this route with the teams which apparently makes almost everybody happy. We’ve got four races in three weeks in January: two four-hour races at Chang International Circuit in Thailand, followed in rapid succession by another pair of four-hour races at Sepang to finish the season.

“Those four races will include different types of races: daylight, twilight, night racing will all feature. So it’s going to be intense, interesting and challenging as well. But that said, that doesn’t mean that we have no further ambition when it comes to the development of the series, and to keep expanding the footprint of the Asia Le Mans Series in the years to come.”

Meanwhile, the ACO’s other two major championships, the European Le Mans Series and FIA World Endurance Championships, edge ever closer to the next races on their schedules. For the ELMS, that’s the season-opener on July 19th at Paul Ricard, and for the WEC it’s the sixth round of the season at Spa on August 15th. The Le Mans 24 Hours, meanwhile, is still set to go ahead in September.

There haven’t been any updates on the situation since mid-May, when Gerard Neveu the ELMS and WEC CEO, spoke to select media. As it stands all the planned races appear likely to go ahead, though whether any events (notably the Le Mans 24 Hours) will allow fans remains to be seen.

Neveu told RACER that Plan Bs will be implemented should any further changes to dates and venues become necessary. But there is a growth in belief that he will not need to. The selection of teams polled by RACER in recent weeks increasingly feel that a return to racing, whether behind-closed-doors or not, seems possible. 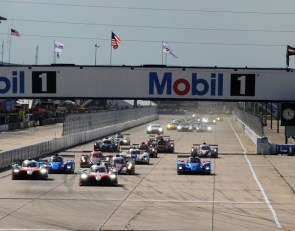