After its strong blastoff last week, NASCAR’s second weekend on TV since its return from the pandemic-induced shutdown – on what is traditionally auto racing’s biggest TV day of the year – took a step backward in audience last Sunday.

NASCAR’s Coca-Cola 600 from Charlotte scored a 2.37 rating and averaged 4.0 million viewers on FOX. That’s down from a 2.58/4.3m for last year’s race and a big slide from the previous week’s 3.7/6.1m for the first Cup race at Darlington. To be fair, though, viewers had to persevere through a rain delay.

NASCAR had already faced a downturn in its second race back, as the second race at Darlington on Wednesday night – the first Cup Series mid-week race of NASCAR’s modern era – pulled a 1.2 rating and 2.1m viewers on FS1. For the sake of comparison, the first Cup race on FS1 last year (Martinsville) averaged a 1.5/2.46m. Darlington 2 was also delayed by rain, however, so the mid-week experiment needs another example to judge. That might come with tonight’s race from Charlotte (8 p.m. FS1) unless it too is plagued by bad weather. The current forecast is for rain all afternoon, with a 60% probability of it continuing to race time.

Meanwhile, NASCAR’s Xfinity Series finally got back to work last week, although it had to wait a little longer than expected after its Tuesday night race at Darlington was postponed until Thursday afternoon. That race averaged just a 0.25 rating and 384,000 viewers on FS1, compared to a 0.73/1.2m for the last Xfinity Series race on a Saturday from Fontana. Numbers from the  Xfinity Series race at Charlotte on Monday are not yet available.

The NTT IndyCar Series is still waiting to get its season underway, but had Memorial Day weekend presence via an “enhanced encore” of the 2019 Indianapolis 500 on NBC Sunday afternoon. The four-hour telecast averaged a 0.44 rating and 645,000 viewers — a small fraction of the 3.44/ 5.4m for the live telecast of NBC’s first Indy 500, but a pretty solid number for a repeat broadcast. 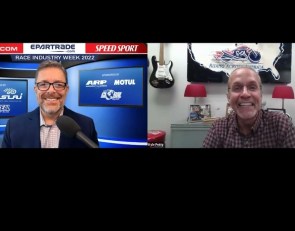