This writer first met Ken Block during the autumn of 1998, when my friend and colleague Davey Coombs and I worked together in launching the magazine Racer X Illustrated – a motocross publication introduced during the X Games/action sports hype of the 2000s.

Block, who had a very heavy hand in creating the iconic shoe brand DC Shoes, was a major motocross fan as well as a major motor racing enthusiast, and was both a significant backer and supporter of what we were doing. And along the way, Ken enthralled us.

Ultimately moving into the sport of rally – a sport he loved since he was a kid in San Diego – Block hit top gear and never looked back. Creating the Hoonigan Racing Division along the way, Block and company powered into the FIA World Rallycross Championship, the World Rally Championship and Rally America.

And that was just the competition side. A master and revolutionary in creating epic motor racing content of all forms (e.g. Gymkhana, Gymkhana GRiD and countless, and wildly popular videos that have racked up hundreds of millions of views), Block has a vision that has played a profound role in not only framing up motorsport, but introducing young people the world over to all the badass things racer cars are capable of doing.

With coronavirus placing all of us up on jacks for the time being, we tracked Block down in Park City, Utah, where he’s taking it all in stride, and is keen to get back to work.

“Well, I live in Park City, so once they closed the mountain, a lot of the people that were here went back home, to wherever that is, and then all of the tourists went home, so I’m almost totally alone up here,” he says.

“It’s pretty empty. Once the mountain closes in April, everyone leaves anyway. It’s not that unusual to us, but it is unusual that there is this much snow on the mountain and it’s closed, you know? That’s a bit odd. But we also bought a ranch outside of town. We have a 100-acre ranch now. We have that so we’ve been going back and forth, staying out there and playing around with the kids and doing schoolwork. We take it a little easier on the weekends, and then we come back to our house downtown for the week. It’s been good, because it kind of reduces the cabin fever and keeps us from starring at the same walls.

“But the good things is that there is a stay at home order in my area, but we live in the mountains and they’ve said, ‘Can you go outdoors? Of course. Can you exercise? Yes. Can you go outside and do chores and yard work? Yes.’ They’ve been very upfront. They stay at home things is more like, ‘keep your distance from other people’ type thing. It’s kind of a wild time.”

As with everyone involved in high-level motor racing, Block’s world has come to an abrupt halt.

“The biggest thing that has been impacted so far is just one event,” says Block. “I had a race in Barbados at the end of May, and that’s been postponed. So far that’s been the only event that’s been affected for me. I think more will be affected. I have another one this June, and I’m hoping that by summer that we will have procedures in place where some things can go back to normal and we can have rally races in the forests. That’s my general hope.

“We’re very concerned about our people, and we’re very concerned about the health standards and safety, and we’re trying to be proactive not only about the business itself, but also in how we handle our employees and their safety. We’re planning for all types of scenarios. We’re dealing with these issues the best that we can. We’re going to survive, I don’t think that’s an issue, it’s just a matter of ‘How do we do this as smartly as possible to keep the heath of our people and the fans the best way possible.’”

Competition, content, media events, appearances, you name it, Block is a four-wheel entertainer.

“Yeah, and that’s the way I look at it too,” he concurs. “At the end of the day, I race cars because I genuinely love to do it. And we turn that into entertainment, and entertaining people that are fans of all this sort of content, so that can range from a simple Instagram post to a 20-minute video on YouTube. So for us at this point, there is really no reason to stop doing any of that besides the fact that I can’t go out and actually race right now.

“We can still make content in my race shop, I can still go snowmobiling in the back country and pretty soon here I’m going to take some of my Can-Ams out to the desert. That’s stuff that we can continue to do. At the end of the day, no matter how bad this is, for everybody from healthy people to even sick people, there isn’t a whole lot to do right now, so… people need to be entertained, and want what best entertains them in their areas of interest. I do have a huge fan base, so we can strategize on stuff that we can make and do that will entertain people.

“I think I’ve been able to figure out how to make content that I love to watch, and I’m stoked that it seems to appeal to a lot of other people. I wouldn’t call it a magic formula, but I definitely build cars from the Hoonicorn all the way to being able to go out and race top-level current machinery. The variety of what we do as a team is what keeps people entertained. I really enjoyed all of my time racing for championships and all that, but I’ve kind of switched up my program for the last couple of years to do stuff that I really wanted to go out and enjoy. And that’s really resonated with the fans, so we just try to make sure that we maximize current avenues of social media and YouTube so that fans can enjoy it as much as I do.”

And there are millions of automotive and automotive racing fans currently locked down in homes, apartments, garages waiting to see what Ken and his Hoonigan cohorts will light up computer and TV screens with next.

“Most of the population is still healthy, but that means a lot of people are sitting inside bored, so they’re watching social media and they’re watching TV or are watching streaming services or live broadcasts. We’re working on a number of things here, and creating entertainment out of it, and I think that’s a good thing, as long as everyone does that in a safe and healthy way.

“We are the human race. We will get through this. It’s going to screw up in a lot of ways, but we are human and we adapt. No matter what, this will have some negative impact, but at the same time too, we’ve got to move forward, and we have to be proactive about our employees and our friends and our loved ones and keeping them healthy.

“At the same time too, we have to continue to school our kids and keep in shape and do things in a smart way. You know, I’ve trained more during this period than ever! My dogs have been walked more than ever, and my kids have gotten more of my attention now for three weeks straight. We have to look at those things as positives. We just need to educate ourselves and get through this problem the best as we can possibly can.”

Times being what they are, Block has had to take a step back and reassess his 2020 competition and content schedule, but he is determined to pick things right back up when word comes that the coronavirus coast is clear.

“As long as things go halfway back to normal this summer, I still have a good program,” he says. “I’ll have stage rallies going from the National Championship in the States. I’ll also have WRC in September, and will be racing Rallycross as well as the Nitro World Games from September to October. I’ll even be going back to Rallylegend in San Marino at the end of the year, which is an event I won my class in last year and was third overall.

“I have a very good, very fun program and I’m excited about that. I’m not racing for any championships or titles anymore, but I’m getting out there and showing the fans some great cars, and we’ve been making some great content around that that we put on social media and YouTube. It has really been quite a good program that I have been running the last couple of years, and I plan to keep doing that for many more.”

And the enthusiasm and love for cars and competition is evident in all Block does.

“I think every race car driver loves what they’re doing, but when you’re not winning, it comes across as kind of a negative, so I’ve always tried to have a bit more of a Travis Pastrana approach,” he laughs.

“Even if you roll the damn thing, you’re still going to enjoy yourself. Sometimes that can be hard, but I think the general idea is that no matter you’re doing, we’re going out and racing these amazing vehicles. Every day I think about enjoying these incredible sports and these incredible cars. Even when things go wrong, I try to make the best of it.

“I think it’s a really interesting world right now because of the electric vehicle opportunities. And I call it an opportunity because there are a lot of possibilities out there that people don’t see. I love the sound [of motorsport]. To me, there is nothing better than hearing a 125cc or a 250cc two-stroke motocross bike being wrung out.

“That’s what I grew up listening to, but my kids don’t know the difference, really. They love the sound of cars, but they also think electric vehicles are really cool. They don’t understand why I don’t own one already. To them, it’s just a different way to propel a vehicle, you know? It’s just ordinary to them. I think that the whole racing world will change over the next couple years and the next decade, because the electric vehicles will make racing different, and maybe even faster.

“I think it’s exciting. A lot of people don’t, and are against embracing it. I‘m really one of the people that’s on the other side of it. I will continue to enjoy my internal combustion engines, but I love the idea and the opportunity of what electric motors can bring to the entire world of motorsports.” 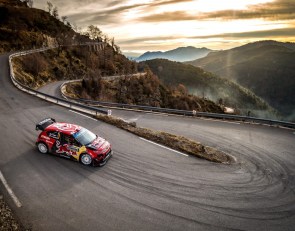