NASCAR dodged another rain cloud last weekend at Fontana’s Auto Club Speedway, although its TV numbers were still slightly off from last year for its third race of the year.

Sunday’s NASCAR Cup Series race, which was threatened by showers but ultimately ran as scheduled, averaged a 2.90 household rating and 4.8 million viewers on Fox. That was down from a 3.05/5.1m for last year’s race at Las Vegas, which ran at the same time on this date last year on the broadcast network.

The Xfinity Series race on Saturday fared better than Cup compared to last year, averaging an 0.73/1.2m, vs 0.74/1.2m for last year’s Vegas race on the same date.

NASCAR moves on to Phoenix this weekend…where the current forecast calls for only a 10% chance of rain on Sunday. 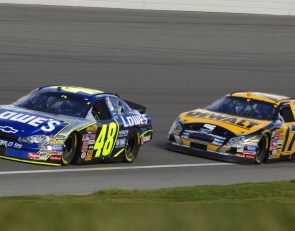