Scuderia Cameron Glickenhaus will send its new SCG 007 Hypercar into battle with a different heart, as plans to propel its FIA World Endurance Championship model with an Italian twin-turbo V6 motor have been halted.

Projected power needs for the WEC’s new Hypercar class, which debuts in September, varies depending on the type of power system chosen by each manufacturer. For those who opt to install a kinetic energy recovery system (KERS), power demands on their internal combustion engine (ICE) are reduced; but in the case of the SCG 007, where company founder Jim Glickenhaus has no interest in adding a KERS unit, his non-hybrid Hypercar would need to hit an ICE output figure that went beyond the car’s original capabilities.

“We began with Alfa Romeo, and they were very excited to go back to Le Mans with us and develop their 2.9-liter twin-turbo V6, which is really a Ferrari engine,” Glickenhaus told RACER. “The problem happened when the rules changed at the ACO and we realized we needed to make an 850hp engine, and unfortunately, (at that output), the motor was not capable of running for 30 hours without interruption. We were forced to look for a new partner that we’ll be announcing in a couple of weeks that will be able to do that.”

Although Glickenhaus’ total power output figure is a bit higher than the approximate number of 785hp that has been heard for Hypercar, the need to change course remains the same. A purebred twin-turbo V6 engine, produced by a specialist racing engine firm, will replace the production-based Alfa Romeo motor.

“And it will be branded as a Glickenhaus,” he added. “The new engine we have will be able to make the output needed for the Le Mans Hypercar. We’ll be paying for the development.”

A 6.2-liter V8 was also considered after engaging the American firm that builds Cadillac’s championship-winning DPi motors, but packaging concerns steered the 007 back to a TTV6 layout.

“We spoke with Earnhardt Childress Racing to see if they felt they could make an 850hp engine for us, that needed to be a stressed member; and they said they could,” Glickenhaus explained. “But when we looked at how it would fit in the back of the car, it was long enough and high enough that it made doing a longtail very hard. We wanted that long curving shape going back from the doors, and the 6.2 would not allow that to happen. So we’ve stayed with the V6 turbo because it’s small enough to fit the overall longtail design.”

The SCG 007 will also undergo wind tunnel testing and tuning with a Formula 1 team Glickenhaus will reveal in the coming weeks.

Amid testing of SCG’s new GT3-style 004C chassis in Italy (photo above), Glickenhaus is coordinating with ACO president Pierre Fillon to have a presence for the brand at the 24 Hours of Le Mans in June as a teaser for the upcoming WEC season in September.

“And, to be absolutely clear, we are also absolutely on track with the 007’s development,” he said. “We’ll be at Le Mans this year, at the invitation of Mr. Fillon, with our 004C Nurburgring race car, which will parade at Le Mans; and the 004 road car; and a display with the 007, because the ACO wants to show the relationship between these race cars and the road.

“We won’t be rushing the 007 to race before we feel it’s ready. Some manufacturers don’t mind doing their testing at the races, but that’s not how we choose to do things. Our car will commence its testing program in September, and we feel it will be ready to start racing in the WEC for the last four races of the championship — Kyalami [in February 2021], then Sebring, Spa, and Le Mans.”

Undeterred by Aston Martin’s withdrawal from Hypercar, Glickenhaus will move forward with the 007 project until the ACO or WEC change direction for the new category, which is in jeopardy of have between one and zero manufacturers to usher in the formula in seventh months’ time. His vision of driving a road-legal 007 to Le Mans, racing for 24 hours, and driving to dinner with it Sunday night to celebrate remains.

Whether sales of the 007 as a production car take place before or after Le Mans 2021 is another topic of interest, provided Hypercar exists as a formula more than a year from now.

“Ford was allowed to race their new GT model at Le Mans before they sold any passenger GT cars, based on the fact that Ford said they would build and sell them. The rules are helpful to (both) big companies and small auto companies like mine, which I’m appreciative of. I’m glad they let Ford race their car in GTE first,” Glickenhaus said. “So when we get closer to Le Mans, we’ll see where we fall in that regard.” 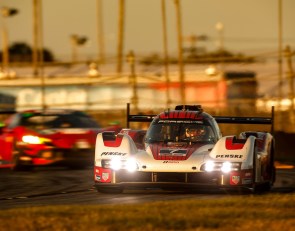