Max Chilton will return for another partial season of NTT IndyCar Series competition with Carlin Racing.

The Briton, who spent 2016-2017 with Chip Ganassi Racing before moving to Carlin, will spend 12 road and street course races along with the Indianapolis 500 in the No. 59 Chevy. As the 28-year-old chose to do last year after failing to qualify for the Indy 500, he’ll share the Gallagher-sponsored entry throughout the season with an oval specialist. According to Carlin, Chilton’s teammate for the No. 59 will be announced at a later date.

The driver of Carlin’s No. 23 Chevy also awaits confirmation ahead of IndyCar’s open test event at Circuit of The Americas, which starts next Tuesday.

“I’m excited to formally announce that Gallagher will be back for the 2020 NTT IndyCar Series season partnering with Carlin for the third season and myself for our fifth season together,” Chilton said, referencing his early years with the team in F3, GP2, and Indy Lights. “The partnership between myself, Gallagher and Carlin is a strong one that honestly feels more like family than the normal motorsports driver, sponsor, and team relationship.”

Chilton’s father Grahame, the former CEO of Gallagher, has been a key partner and financial engine behind Carlin’s international racing operation.

“I couldn’t be more thankful for Gallagher’s continued support of myself and Carlin as we work toward success in the NTT IndyCar Series,” the former Marussia Formula 1 driver said. “To have the opportunity to represent more than 30,000 employees of Gallagher, a brand that focuses so heavily on teamwork and innovation, is a true privilege and I look forward to getting solid results this season.”

Carlin is the last IndyCar team to nominate its drivers for the upcoming 17-round season, and barring Chilton’s continued presence, will sport a different line-up than it used to close the 2019 championship.

Of the six drivers who rotated through both cars, Charlie Kimball has signed with A.J. Foyt Racing; Pato O’Ward has signed with Arrow McLaren SP; Sage Karam will contest an expanded effort with Dreyer & Reinbold Racing, and Conor Daly was added to Ed Carpenter Racing, leaving Chilton, and RC Enerson who did a single race for the team as the only two who aren’t under contract elsewhere in the paddock.

Chilton has recorded 62 IndyCar starts with a best finish of fourth at the 2017 Indy 500. 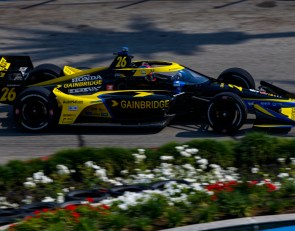