Some last-minute gift ideas supporting a worthy cause: Autographed prints from the nine live Marshall Pruett Podcasts held at 2019 NTT IndyCar and IMSA WeatherTech Sportscar events are available for purchase online, with all proceeds benefitting the Wilson Children’s Fund (WCF).

The fund (www.wilsonchildrensfund.com) was established in 2015 to provide financial stability for the late Justin Wilson’s daughters, Jane and Jess. At the time of IndyCar driver Wilson’s death, he was the sole provider of income for his family, and had invested the majority of their savings in new business ventures that left his daughters, and wife Julia, without a safety net.

The IndyCar community rallied around the family immediately, auctioning helmets from every driver in the field along with a wide-ranging array of memorabilia, to support the newly created Wilson Children’s Fund.

This is the third holiday fundraiser. There were signed prints in 2016, and again in 2017 (with the help of Fernando Alonso and McLaren Racing).

TorontoMotorsports.com is selling the prints, which range from $100 to $150, with 100 percent of the proceeds going to the Wilson Children’s Fund. 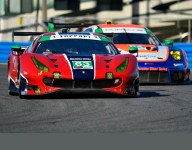 Aston Martin has confirmed an unchanged driver line-up of Sebastian Vettel and Lance Stroll for 2022. Though never seriously in doubt, (…)