Who Will Win: SCCA Runoffs Part 1

Who Will Win: SCCA Runoffs Part 1

The Sports Car Club of America National Championship Runoffs is the winner-take-all title fight for SCCA Road Racing glory. For 2019, this on-track battle has wound its way to the northeast, where it will pit racers against one of the best racetracks around: VIRginia International Raceway. Who will rise to the top and claim Runoffs gold? We’ll find out for sure when the green flags fly on Oct. 11-13; for now, though, all we can do is guess. As it turns out, guessing is a specialty here at SportsCar magazine – and we will be sharing those guesses with you here throughout the week.

Leaping from the Piedmont countryside, VIR held its first SCCA race in August 1957, and after shuttering its doors for a time, the facility enjoyed a rebirth in 2000 – and we’re elated that it did, as the facility and track are both breathtaking. Then, in April of this year, the Hoosier Racing Tire Super Tour visited the track, giving some 500 racers a chance to preview the upcoming Runoffs venue, testing their setups and dialing in the ideal line to victory.

Unfortunately, Mother Nature saw fit to rain on that Super Tour parade, making for challenging track conditions and a somewhat insufferable upper paddock. The upside to having such a brutal test run at VIR, however, is that lessons were learned and have helped set the Runoffs on the road to victory. Ever since that April event, plans have been in the works to eliminate the biggest issues and, come October, we’re anticipating a mighty successful Runoffs.

What the SCCA can’t control is the rain and, to that end, our predictions for who will win this year’s Runoffs are probably wrong. You see, the last Runoffs to be significantly impacted by rain was in the Road America days, leading us to believe we could be due for a damp championship event. That said, the predictions that follow are mostly made with the assumption of dry races – which they won’t be – so it’s a safe bet to ignore everything you’re about to read.

Oh, and pro tip: Log on to scca.com/runoffs on Oct. 11-13 for live timing, plus a video stream of all the racing action as it happens!

Spec Miata
VIR offers challenges and opportunities unlike any encountered in recent years, and it’s not clear that a home track advantage will count for much. At this track – and especially in Spec Miata – strategy will be key.
“The strategy is going to be: You better have some good teammates,” says two-time SCCA National Champ Jim Drago. “The draft is huge here. Local knowledge never hurts, but I was able to qualify on pole my first time there, so I don’t think it is as remotely important as it is at tracks like Mid-Ohio and Sonoma.”

Drago plans to turn up with a strong group of East Street Racing teammates, including 2017 SM Champion Preston Pardus and contender Todd Buras. “Brian Henderson and Peter Ensor are also in our group of five,” Drago reveals. “We’re planning on working together after we see how it shakes out.”

Only a fool would discount Drago at the Runoffs, but we’ve got our eyes on an equally fast racer for the top step, come the October event. Danny Steyn has been coming to the Runoffs since 2010 and steadily raising his game. Last year at the Sonoma Runoffs, Steyn piloted a Miata to the Super Touring Lite championship, and he’s also been mixing it up all season in SCCA’s Majors and Hoosier Super Tours.

“I’ve raced at VIR a lot,” Steyn says. “It’s one of my favorite tracks. One of the greatest sections in any U.S. track is that uphill esses. I love running flat-out with the rhythm and sensation you get there. It’s addictive.”

Steyn believes that this year’s race could be won by someone who hasn’t qualified up front. “There are some tracks where you absolutely have to qualify on the front row to have a shot,” he explains. “At VIR, we get strung out on the straights and then we accordion up in the turns. With good drafting techniques and good strategic moves and passes and teammates of convenience, you can overcome a poor qualifying position. There are very few tracks where you can do this, but it is possible at VIR. At this track, the most important thing is just being mistake free, or as close as you can get to it.”

One thing everyone agrees on is that the front of the pack will include many familiar names. Steyn lists them off in rapid succession. “Jim Drago, Preston Pardus, Todd Buras, Tyler Kicera, Jared Thomas, and Matt Reynolds,” he says. “They’re at the front every single race. No matter what track they’re at, they’re always at the front.”

For his part, Kicera plans to challenge both Drago and Steyn for the championship. “I feel like I have as good a shot as anybody,” Kicera remarks. “I think that VIR suits my racing style, which is calculating, using a lot of strategy. I think a key to winning is being in the right place on the last lap.”

One driver who could upset everyone’s plans is Chris Haldeman. Haldeman will also be racing in STL and STU at the Runoffs, but it’s not out of the question that he could contend for the SM win.

While we predict that it’s going to be Steyn, Pardus, and Drago on the podium, we also know anything can happen. And, this being Spec Miata, anything will happen. 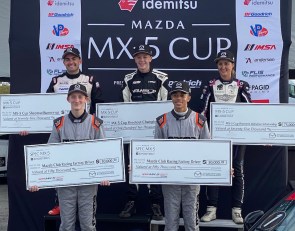 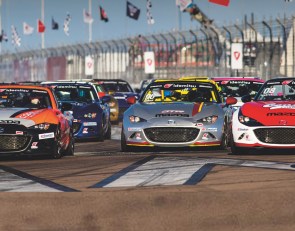