Since their arrival on the Road to Indy Presented by Cooper Tires, Oliver Askew and Rinus VeeKay have been nearly inseparable.

As they battle for the 2019 Indy lights Presented by Cooper Tires championship, where Askew leads VeeKay by 45 points, their paths converged once more last week at Portland International Raceway. Both drivers made their NTT IndyCar Series testing debuts on the same day, as Askew hopped into Scott Dixon’s No. 9 Chip Ganassi Racing Dallara, while VeeKay drove Ed Carpenter Racing’s No. 20 Dallara.

The pair have paced each other on every step of their Road to Indy Presented by Cooper Tires careers, sharing more than half (22 of 43) of the podiums on all three levels: the 2017 Cooper Tires USF2000 Championship (won by Askew, with VeeKay second), the 2018 Indy Pro 2000 Championship Presented by Cooper Tires (won by VeeKay, with Askew third) and this season’s Indy Lights championship. So, it was only fitting that Askew and VeeKay shared the spotlight on August 7 at Portland International Raceway, becoming the first drivers to race all three current Road to Indy chassis (the Tatuus USF-17 and PM-18, and the Dallara IL-15) and drive the Dallara IR-18 IndyCar.

When the day arrived, both drivers were determined to take the new experience in stride.

“I went into the day treating it like any other test day,” said VeeKay, “but at the morning meeting of all the drivers and safety crew, I was standing next to drivers like Ryan Hunter-Reay and Alexander Rossi. Instead of looking up to those guys, I was standing with them. And to work with Ed Carpenter and the No. 20 crew, I felt so blessed to have this chance.”

“I’ve been unusually calm this whole year, and it was the same the morning of the test,” said Askew. “But I was so prepared going into this test; I did a lot of homework, talking to drivers who have driven both and watching hours of on-board footage from last year. At the test, I was surrounded by these legendary guys – Scott Dixon, Chris Simmons, Mike Hull – but I went into it like a regular test day, with no expectations aside from learning all I could. But once it was all over, I could look back and soak it all in and realize the milestone I had just crossed. It was pretty cool.”

Askew and VeeKay had similar reactions to the increased power and downforce, and impressively, neither put a foot wrong through the test day. VeeKay logged 140 laps to Askew’s 130, with each acknowledging the differences between the IL-15 and the IR-18.

“When you go to power, you really get pushed back into the seat,” said VeeKay. “The brakes took some getting used to, since they are carbon brakes so you can really slam them, and they really stop. But it takes a bit to get the brakes up to temperature, and that’s something to think about, to warm up the tires and the brakes. And the downforce is crazy, especially in Turns 4 and 5 at Portland. That’s where you can really feel the tire and the whole car grip, it’s an amazing feeling. It was really comfortable to drive. We did a few runs on new tires and I didn’t know what to expect, but I felt comfortable getting all the grip out of the tires. We did some quali-type runs and I didn’t anticipate going that quick that early in the day. It went pretty well!”

“The downforce is insane,” Askew agreed. “That’s the biggest difference, the amount of grip in the high-speed corners. I was expecting the car’s braking ability, because that’s what comes with so much downforce. It does everything just that much better than the IL-15. The tires were much softer as well and the lateral grip was impressive. There is also much less shock in the steering wheel, because the dampers are so developed. The biggest hurt on your body is the sheer G-forces. The car was very reactive to changes; you can feel every change the team makes. It was cool that they could see what I was struggling with on track, since they were seeing everything in real time. My feedback just confirmed what they were seeing. We did short stints, working through the run plan that the team wanted to do before they go back for the race.”

VeeKay and Askew both agree that coming from the Indy Lights Dallara IL-15 made the jump into the Indy car just that much smoother. They see the success their immediate predecessors have had behind the wheel of the IL-15’s big brother and hope to get a chance to make their own mark in 2020.

“The Indy Lights car really translates to the IndyCar,” said Askew, “All you have to do is look at the success that guys like Pato O’Ward and Colton Herta have had. The new aero kit is much closer balance-wise to the Indy Lights car. I felt like a boss in the high-speed corners and I was still under-driving the car. But I wasn’t there to light the world on fire; I was there to give feedback to the team. And that track can bite you, so if I’d gone off and banged up the car, that wouldn’t have helped anyone.”

Both drivers began their careers in USF2000 just two short years ago, progressing up the ladder and standing now just one short step away from their shared dream of racing in the NTT IndyCar Series. Askew and VeeKay both agree how the Road to Indy helped to put them where they are now.

“I said this about Indy Lights, but it’s just that much more so now: when I was racing USF2000, this just seemed so far away,” said Askew. “The Road to Indy helps you so much, just racing in front of the IndyCar teams and racing at the same tracks every weekend. Having them see you racing, seeing guys like Mike Hull and Michael Andretti every weekend, and staying relevant, that’s huge. And the way the three cars are lined up now is extremely good. The average lap time increase in each step is very manageable and the driving styles are very similar. When I jumped into an Indy Lights car, I was ready to go, and it was the same way last week. All the teams are so professional, like Cape Motorsports, with whom I won the USF2000 championship. That experience got me ready to work with an IndyCar team like Andretti Autosport, so the lower levels are vital.”

“I was 15 years old when I decided to compete on the Road to Indy,” said VeeKay. “When this test was set, my manager, Charles Crews, told me that I had gone from USF2000 to IndyCar in 30 months – and that’s quite a cool stat. The Road to Indy has made me the driver I am today. There are such great drivers and cars in each step of the ladder, with more power, more downforce, more tires. It’s a great system. And if there was no scholarship program, I would never have gotten to Indy Lights and would never have had that test. It is so special that there is a program like this. It helped me reach my goals.”

But before IndyCar beckons, there is a championship to be decided. Ryan Norman, who did his own IndyCar test with his Andretti Autosport team back in June, lies a mere 38 points behind VeeKay in third place. Both Askew and VeeKay know what is at stake: the scholarship that guarantees the 2019 Indy Lights champion three NTT IndyCar Series races including the Indianapolis 500.

“The chapter of testing an Indy car closed that night in Portland, and now I’m ready to go for the Gateway test and race,” said Askew. “My priority this year is to win the championship and there are only a few weekends left.”

“The end of the season is getting close, only five more races,” said VeeKay. “I am training as hard as I can to be as fit as possible to be as ready as possible, to get the best results out of myself.” 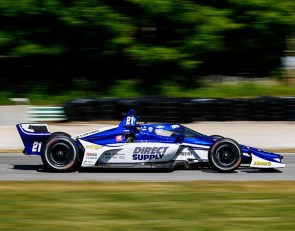 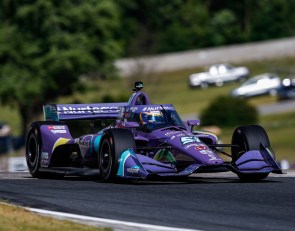