Sunday’s spanking by Alexander Rossi at the REV Group Grand Prix at Road America can be summed up in the reactions of Team Penske’s Will Power and Josef Newgarden.

“I never saw him (Rossi) all day,” said Power, who finished in second place.

“Wow,” replied Newgarden when told how far behind the leader he was halfway through the race. “That’s impressive.”

Rossi’s 28-second victory over Team Penske indicated the Andretti Autosport driver’s amazing pace and the fact the most successful team in IndyCar history had nothing for him on the 4-mile road course.

“It’s hard for me to understand how he can be so fast for a whole stint,” said Power, who’s delivered several butt-kickings of that ilk among his 35 career wins. “My car didn’t feel bad — it had reasonable balance and I guess if Alex wasn’t in the race I would have had a good car.

“But it’s hard to say you had a good car when you get beat like that.”

Newgarden, who retained the championship point lead, was just as perplexed as his teammate.

“He was a half a second a lap quicker for 55 laps? Obviously, we didn’t have enough today … we were just a little shy. OK, I guess a lot shy. I thought we had a great package but we’ve got to make it a bit stronger. Alex and Andretti were too good for us today, so we gotta get back to the drawing board.”

The race went the distance without any yellow flags, but neither Penske driver reckoned it would have mattered if there had been one. The only possible opportunity came when a piece of rumble strip came loose and was lying on the track.

“It was off line and no hazard,” said Newgarden, whose three wins still lead the way in 2019.

Added Power: “Maybe we should have complained and yelled it was dangerous and, ‘Where’s the caution?'” he said with a grin. “Naw, I don’t think a yellow would have mattered. I think the only thing that might have helped us was rain.”

Newgarden was behind from the get-go, after losing three spots at the start.

“The left side was not the place to be on the start and we lost a lot of ground, so we made a nice recovery,” said the 2017 IndyCar champion. “Man, it was tough keeping Graham (Rahal) and those guys behind us the last 10 laps, so a podium was a good result.”

Asked if it was tough to concentrate with a huge lead like Rossi had, Newgarden replied: “No, I find it quite lovely to be that far ahead.”

“What are we missing? It’s tough to pinpoint that but for me to knock off half a second a lap I’d have had to use push-to-pass on every lap. We leave trying to understand how we can come back and be closer next year.

“Man, it’s hard to win in IndyCar these days. For someone to win with that kind of an advantage, that’s rare.” 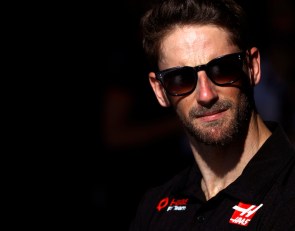