What does Hulman's Clabber Girl sale mean for its racing assets?

What does Hulman's Clabber Girl sale mean for its racing assets?

There was a lot of speculation following the sale of Clabber Girl on Wednesday to B&G Foods for $80 million. The Hulman/George family needs money? By getting rid of its longest-standing asset, Hulman & Company is streamlining so the Indianapolis Motor Speedway can be sold?

But Hulman & Company CEO Mark Miles puts the brakes on either theory and gives a simple explanation.

“This is a matter of straightforward strategy, and it makes sense from every perspective,” he said. “For Clabber Girl, it is now owned by B&G Foods – a major player in the food industry, which owns over 50 brands and has a major presence on the baking aisle.

“They have the resources and the expertise to invest and ensure the continued growth of Clabber Girl in Terre Haute. For the Hulman Company going forward, it allows us to focus entirely on our core business – racing, in the forms of the Indianapolis Motor Speedway and the IndyCar Series.”

Miles elaborated on the sale of the baking powder company that’s been synonymous with the Hulman family since 1899 to B&G – the food conglomerate that maintains 50 brands including Cream of Wheat and Green Giant, among others – to RACER.com.

“If you were going to sell, this is a good time in the market, and the proceeds from the transaction give us cash and flexibility as to how to use it in the future,” Miles explained.

Francis and Herman Hulman formed the Hulman Company in 1850 and began manufacturing Clabber Girl baking powder in 1899. Tony Hulman, who would purchase the Indianapolis Motor Speedway in 1945, started a nationwide marketing campaign to promote Clabber Girl in 1930 and took the business to new heights.

Since then it’s been the bread and butter of the Hulman/George family and city of Terre Haute, and has been the nation’s leading source of baking powder.

“It’s a family company that employs 180 people now has the ability to reach another level,” continued Miles. “The retail business has been pretty flat, so like I said, this was a good time to sell.”

Tony George, the grandson of the IMS savior and chairman of the board at Hulman & Company, said in a statement: “The Hulman-George family takes great pride in the Clabber Girl brand’s success, history and critical role in the development and rich cultural fabric of Terre Haute. Clabber Girl will always be a cherished and celebrated part of our legacy, and we’re excited we’ve found a strong steward for its very bright future.” 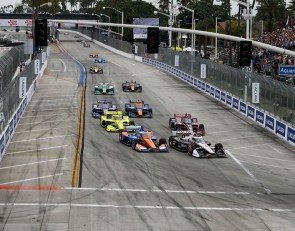