Busch led a race-high 97 laps in the Vankor 350 on route to his 55th career series win and his 202nd spread over NASCAR’s top three national series.

“Those guys were able to keep up with us just way too much throughout the night,” Busch said of Friesen and several other pursuers. “You know, it’s a better race that way when they’re able to keep up. But that means we need to go to work and work harder in order to get ourselves faster.”

Pole winner Enfinger led the field to green, but Stage 1 was soon slowed by the first of four cautions, an incident involving Todd Gilliland, Chastain and Brennan Poole coming out of Turn 4 on Lap 3 winding up with Gilliland sliding through the front-stretch grass but continuing on.

Next, Harrison Burton, who started 10th, spun into the Turn 1 wall on Lap 11.

“I got loose on corner entry and just lost it,” said Burton, who finished 31st. “Happy I’m ok. Happy I’ve got a good team behind me.”

Angela Ruch and Gus Dean triggered the third caution in Turn 2 on Lap 18. Dean’s damage was considerable, and when he wrecked again on Lap 26, he called it a night.

Enfinger won his first stage of the season, beating ThorSport Racing teammate Ben Rhodes to the line by .034-seconds. However, a pit road penalty sent Enfinger to the back of the pack and he spent the next two stages working his way forward.

“This was our first normal race of the season,” Enfinger told his No. 98 ThorSport team following his third top-five finish of the season. “Let’s keep doing this and the wins will come.”

Another restart and more laps in the lead for the unstoppable Kyle Busch. Image by Baker/LAT

Busch inherited the lead to start Stage 2 on Lap 42. Six laps later, Anthony Alfredo, who restarted sixth, lost control of his truck following contact with Friesen entering Turn 1. The No. 54 truck hit the wall and erupted into flames, forcing NASCAR to red-flag the race for 15m51s.

Busch remained on the point with Crafton, Chastain, Bubba Wallace and Brett Moffitt in tow for the Lap 57 restart, then held on for his sixth stage win in 2019.

With a fuel-only pit stop, Sauter took the lead out of the pits on Lap 75. He soon faded, though, allowing Busch to regain the lead followed by Moffitt. Moffitt barreled past Busch on the outside exiting Turn 2 on Lap 99 with Rhodes, Friesen and Enfinger in pursuit. But four laps later, with Busch back in the lead, Korbin Forrister spun in Turn 2 to ignite the ninth caution.

A great race and strong runnerup finish for Friesen who now leads the Truck Series points. Image by Jarrett/LAT

Busch held the lead through the 10th and final caution on Lap 116. Friesen, who started from the rear after an engine change, battled Busch on the final restart. Although it took Friesen 10 laps to lead one circuit, his time at the point was short-lived. He was forced to settle for second — the fifth runner-up result of his career.

“The last couple of laps were just mad,” Friesen said after his best finish of the year. “We were just tight. I just got loose underneath him. He gave me some room. Originally, I thought he was right there on my quarter. But he was doing what he had to do. After that, I was just tight.

“Proud of my guys,” Friesen continued. “Proud of Halmar. Man, just a bummer. I thought we could have got him if we had gotten clear.”

With 21 laps to go, Moffitt made contact with Rhodes battling for fourth, causing his left rear tire to go flat. Although Moffitt kept the No. 24 Chevrolet off the wall, he was forced to pit for tires and dropped to 19th, two laps off the pace.

Sauter threaded his way through the carnage and a track record 10 cautions to take third. Image by LaBounty/LAT

“The No. 24 (Moffitt) was who I was really worried about,” said Busch after the race, “but then something happened to him. (Friesen) was really fast and on our tailgate the whole finish of that race — until about the last five laps.

“I don’t know if he just got heated up or what back there. He put up a good fight and about got to me a couple times there. Fortunately I was able to hold out and keep this truck up front. We just lacked a little bit of overall speed tonight and we didn’t have exactly what we wanted.”

Busch returned to the lead with 20 laps to go and held on to the finish. Friesen, meanwhile, now leads the Gander Outdoors Truck Series standings by six points over Enfinger. 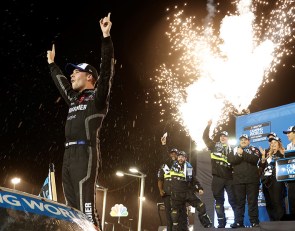