Trans Am set for its 23rd race at Road Atlanta

Trans Am set for its 23rd race at Road Atlanta

The Trans Am presented by Pirelli returns to Michelin Raceway Road Atlanta on March 29-31, continuing a legacy that spans five decades.

The upcoming event weekend will mark the 23rd Trans Am race at the 2.54-mile Georgia circuit. Trans Am has been a long running staple of the Road Atlanta schedule since 2009, staging annual events in addition to having two feature races in 2012.

The roster of racers who have competed at the track and taken Trans Am victory not only reflects several of the front-runners in the modern championship, but also a strong collection of hall of fame names as well.

The winners in historic Trans Am events at Road Atlanta reads like a who’s who.

Trans Am debuted at Road Atlanta on April, 15, 1973, with Peter Gregg winning in a Brumos Porsche Carrera RS. Al Holbert was second in a Carrera RSR, followed by the pole-winning Corvette of Marshall Robbins in third.

The next visit to Road Atlanta was in 1982, won by Jerry Hansen in a Corvette. There were five more Road Atlanta races in the 1980s: 1984, won by Darren Brassfield in a Corvette; 1986, won by Chris Kneifel in a Mercury Merkur XR4Ti; 1987, Pete Halsmer, in a Merkur XR4Ti, with Paul Newman turning the fastest race lap in a Nissan 300ZXT; and 1989, Dorsey Schroeder in a Ford Mustang. Jack Roush was winning car owner for the latter three events.

While the Trans Am did not visit Road Atlanta in 1988, the circuit still proved to play a key role in that year’s championship.

“I got a call from Joe Hoppen, and he said he wanted me to come to Road Atlanta,” 1988 champion Hurley Haywood recalled. “I got there, and found an Audi 200 Quattro, completely stock with a roll bar. It even had street tires. Hoppen told me that was my race car. From there on, we used Road Atlanta a lot to test that Trans Am car. At first, everybody laughed at us — it was basically a street car with four doors — until we got to the first race at Long Beach, which we nearly won. Then I won the next race at Dallas — I went completely sideways in the gravel to pass Willy T. Ribbs — and we went on to win the championship. And it all started at Road Atlanta.”

The 1990s hosted four races. Ron Fellows won in 1993, in a Mustang owned by Tom Gloy. Scott Pruett captured the 1994 event, winning from the pole in a Buz McCall Camaro, while Tommy Kendall won in 1995 in a Roush Mustang. The next event was in 1999, won by Chris Neville in a Huffaker/Kvale Mustang, while popular Boris Said won in 2002, driving a Panoz Esperante.

Trans Am’s next visit came in 2009 — and has occupied a key position on the Michelin Raceway Road Atlanta schedule every year since then. 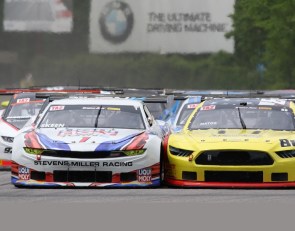