The 50-minute single-driver sprint race was halted by a red flag for an accident involving Nicolai Elghanayan’s MarcoPolo Motorsports KTM X-Bow GT4. The restart resulted in a dramatic nine-minute shootout to the finish.

Behind, James’ red-white-and-blue Panoz made a late charge to pull alongside Pumpelly as the white flag flew. The Englishman then managed to hold the inside line through Turn 1, emerging in the lead in dramatic fashion.

James crossed the line just 0.696s over Pumpelly to give Team Panoz Racing its first victory since the passing of team owner and legendary motorsports figure, Dr. Don Panoz.

Buford, who led the opening 22 laps of the race, finished seventh in GT4 Pro.

In GT4 Am, Alan Brynjolfsson emerged from the wild final restart to claim his first win as a solo driver in the Park Place Motorsports Porsche.

Brynjolfsson, who teamed with Trent Hindman for victory in the second GT4 America SprintX race at Circuit of The Americas last weekend, passed Preston Calvert’s Panoz for the GT4 Am class lead moments after the final restart.

Calvert wound up third in class after a battle with Tony Gaples’ Blackdog McLaren, Gaples finishing second in his first race driving the team’s new 570S.

Class pole-sitter Jarett Andretti (Andretti Autosport McLaren) started strongly, but tangled with Ian Lacy’s Mustang on lap 15, backing into the wall and sustaining rear-end damage. this brought out the first full-course caution of the race. 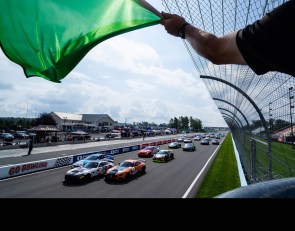