When Lexus arrived in the Grand-Am paddock with a pair of orange IS 300 racecars to compete in the Sport Touring class, the marque had only been around for 13 years. Generally thought of as a luxury car brand, the IS 300 made an immediate impression on the racetrack. Only two years later, Lexus made a bigger splash when it paired with Chip Ganassi Racing to power its Daytona Prototypes in the Rolex Series.

During their six-year run, the Lexus-CGR partnership fully established Lexus’ sporting bona fides on the basis of 25 race wins, including three consecutive overall wins in the Rolex 24 At Daytona. Scott Pruett was behind the wheel for 22 of those trips into victory circle, which helped him earn two drivers’ championships in 2004 and ’08.

Of the three Lexus-powered Rolex 24 wins for Chip Ganassi Racing from 2006 to ’08, the middle one may well have changed the course of endurance sports car racing for the foreseeable future. The engines had become so powerful, efficient and reliable over 24 hours that the race was now run at the flat-out pace of a sprint. After a fierce race-long battle, Pruett led across the line for the win, along with co-drivers Juan Pablo Montoya and Salvador Duran, but the second place car was on the same lap, and the third-place machine only two laps in arrears.

A fourth-consecutive win in the 2009 race was narrowly lost when Montoya fought all the way to the finishing line, only to fall short by a meager 0.167 seconds.

It was successes like these at Daytona and other races that helped pave the way for the creation of the F brand that debuted in 2008 with the IS F sports sedan. Incidentally, the “F” moniker is derived from Fuji Speedway in Japan, where much of the testing and development work takes place.

“Competing in IMSA with the RC F GT3 has given Lexus the opportunity to demonstrate our performance capabilities on the race track and take those learnings to continuously improve our F brand performance vehicles for the showroom,” says Lexus Motorsport Manager, Jeff Bal. “What better way to prove your performance than against some of the world’s best and most storied competitors.”

Several F brand models followed to wide acclaim before Lexus produced the RC F GT3 in 2017 for competition in the IMSA WeatherTech Championship’s GT Daytona class. After a season of getting the cars dialed-in, the RC F GT3s returned in 2018 to net a pair of wins, at Mid-Ohio in May, followed by VIR in August. In a season that was closely disputed among eight manufacturers, Lexus finished fifth overall in GTD manufacturer points, a mere four markers behind third place.

“We were constantly developing the car last year, improving the drivability as well as improving our race setups and executions,” says race winner Jack Hawksworth. “This year, we have a new team running the program, and it’s full of a bunch of talented people. But like all new teams, we’ll need some time to gel. The development on the car gives us a leg up, and so far the balance on the new Michelin tires is good.” 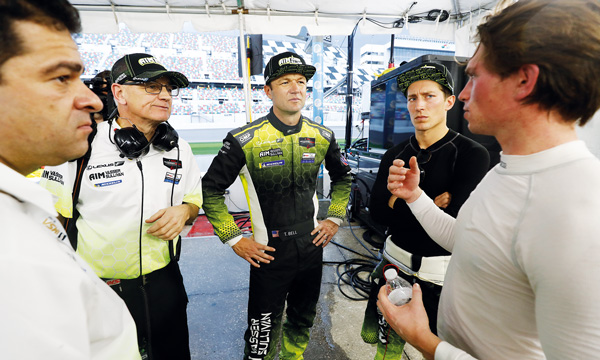 It’s nearly all change for Lexus at the start of the 2019 IMSA WeatherTech season. The cars are entered thanks to a fresh relationship with AIM Vasser Sullivan (AVS). The pair of RC F GT3s will be raced by Hawksworth, partnered with Richard Heistand in the No. 14, while new recruits Townsend Bell and Frankie Montcalvo will lead the charge in the No. 12 machine. Maintaining continuity, Hawksworth has driven the RC F GT3 since the beginning of the program, while newcomer Bell adds GTD class championship-winning experience to the roster.

If past form can be a predictor of future results, then the third season for Lexus in the WeatherTech Championship should be a breakout one for a marque that is no stranger to winning races and championships against the very best. Watch this space…

It was a day of big heat and spins as Arrow McLaren SP, Chip Ganassi Racing, and Meyer Shank Racing put Portland International Raceway to (…)