It’s a rare occasion when the throwback livery chosen by a manufacturer has family ties to not one, but two of its current drivers.

That’s the case with Acura and its partners at Team Penske with its new white and orange colors featured on the pair of ARX-05 DPis set to vie for victory this weekend in Daytona. Calling back to the Comptech Racing Acuras that first appeared in 1986 with IMSA’s former International Sedan series, and continued—most famously—with the team’s step up to the GTP Lights class using NSX V6 engines, the Comptech colors were synonymous with the Acura brand.

Two international driving talents, South Africa’s Wayne Taylor in 1992, and New Zealand’s Steve Cameron from 1991-1993, were brought in during Comptech’s GTP Lights days to help secure wins and a championship for the luxury offshoot of Honda America.

Cameron, who moved to Sonoma, California, along with his brother Ricky, brought home a pair of winner’s medallions from the 1991 and 1992 24 Hours of Daytona, and Taylor, who settled his family in Florida, scored a win for Comptech on his debut at Laguna Seca in 1992.

For Cameron, the two Daytona wins from three tries with the Acura team served as the highlight of his brief sports car career, and for Taylor, the best days would follow as he went on to win IMSA’s WSC championship – the replacement for GTP – in 1994 before more titles and major endurance racing victories were earned.

Cameron’s nephew Dane, already a two-time IMSA champion, and Taylor’s son Ricky, the 2017 IMSA champion and Rolex 24 At Daytona winner, are enthused to carry on the family legacy of wearing the Comptech livery with their respective Acura Team Penske entries.

“I’m a huge fan of motor sports and I’m a fan of my dad’s career,” Taylor told RACER. “Knowing everything he’s raced, I’ve always loved the Ferrari 333, the Chevy Intrepid, and the Acura GTP Lights car. They’re all iconic cars, and that orange and white Acura… it was always in our first house when we were growing up. That car was on the wall, a big poster of it from the top view, and I always loved those colors, the bright, bright orange.”

Prior to being signed by Acura and Penske in 2018, Taylor spent most of his career driving for his father’s team where family history, in the form of certain colors or sponsors with historical significance, was the norm.

“I thought when I left, they whole family trend was gone,” Taylor adds. “But now, it’s kind of cool. I never really thought I’d get to drive a car like the Acura ARX-05 with a livery from a time in my dad’s career that wasn’t maybe as well-known as other cars he drove. He was hired basically to help Acura win the championship. Parker Johnston was, as everybody knows, the lead driver there at the time, and dad was hired to support and help on the championship.

“It’s cool to have an opportunity now, actually tying what we’re doing in 2019, to drive in the livery that has such importance to Acura. It also has importance for me.”

Accompanying his father on a regular basis, Cameron grew up at his uncle’s race car prep shop at Sears Point where the back-to-back Daytona wins were an immense point of pride for the transplanted Kiwis.

“It’s kind of funny because the pictures on the wall in my uncle’s shop, in his office, with that car, he had them everywhere,” Cameron said. “I didn’t really think much of it until later, and honestly, we grew up around Formula Atlantic and open-wheel cars, so I didn’t know a ton about sports cars when I was younger. But it’s super cool to be able to be in that same livery representing Acura in my own career. It’s funny the way the world works.

“Not only is a Cameron in another Acura prototype program, but the cars literally looks exactly the same. I haven’t actually talked to my uncle about it yet, but I’m sure he’ll get a good kick and a good smile out of it, too.”

Outside of his role as a race engineer in various racing series, Cameron’s father Ricky looks after a number of impressive vintage racing machines. Following a restoration or significant changes to some of those cars, the elder Cameron has called on his son to perform test driving duties, and in one instance, he piloted the mythic All American Racers Eagle Mk III that dominated IMSA’s GTP class from its introduction in 1991 through the category’s swan song in 1993.

With familiarity of the era’s prototypes, Cameron made it clear wants to do more than win races for Acura Team Penske in its retro Comptech livery.

“Even more on the bucket list is to drive the real thing, the real deal Acura GTP Lights car,” said Cameron, who got to drive an Acura NSX GT3 in the orange and white during a one-off Pirelli World Challenge race in 2017. “It’s still something that I really would like to do, especially now that I’m actually a part of the program and representing Acura.

“So that would be really cool to complete that trio there of competing in their GT3 car, obviously now the ARX-05 and then the old Lights car. It would be great to compare all the differences there, 25 years a part, between two eras of the prototypes as well. That would be a dream to get to do that.”

Cameron, and possibly Taylor, could have that wish granted later in the year as IMSA celebrates its 50th anniversary. With a few Acura Lights cars available for use, and more undergoing restorations, sampling new and old Acura prototypes – maybe with Steve Cameron and Wayne Taylor in attendance – would make for a great experience.

Another experience Cameron is hoping for involves adding his name to the family’s winning account at the Rolex 24.

“I’ve been able to win some championships where my uncle Steve wasn’t able to do, but he still has the Rolex wins over my head, so that’s the inter-family struggle and finger pointing,” he said with a laugh. “Until I can match him – or get one more than him there, hopefully – he’s always hanging that over my head, the fact that he’s got two of those and I don’t.

“To do it in a car that looks the same as Steve’s would obviously be even better, especially being that it would be my first win at Daytona. Hopes are high, and maybe the family success there can bring some mojo for me because I’m 0 for 10 right now, and I’m looking to fix that.”

Cameron also has his eye on a retro celebration of sorts if he were to win the Rolex 24 in the Comptech livery. Decades ago when his uncle won the race, gold IMSA medallions were handed out to each driver. Today’s winners receive Rolex watches, which are far more valuable, but if we’re talking about shiny objects, Cameron might ask his uncle for an assist with and old-school medallion to wear around his neck.

“I need to get uncle Steve to dust them off a little bit and take them out from wherever he has them hiding,” he said. “That’d be pretty cool; I’d look like Flavor Flav. So, obviously all the teams are doing their part with throwback liveries, which is pretty cool, so why not do something like that with the trophies? I mean, I’d still want a Rolex if we win, but some of the throwback trophies and gold chains would be amazing.” 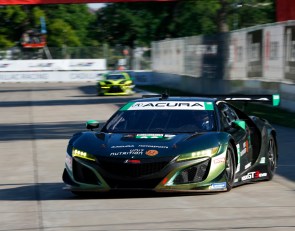