In RACER Magazine: How to Win Ugly

In RACER Magazine: How to Win Ugly

Its drivers couldn’t love this weird, six-wheeled Tyrrell P34. But that didn’t stop it becoming a grand prix-winning icon of 1970s Formula 1.

“I thought they’d completely misunderstood what the requirements were,” says Frank Dernie with sharp-tongued conviction. The former Williams designer is never one to hold back… Nevertheless, no one can take away the unique status of arguably the most memorable and far-out Formula 1 car in history: it wasn’t just weird – it was also a grand prix winner.

Five years after Tyrrell’s P34 blew our minds, Williams, too, chose to add a couple of extra wheels. The Tyrrell had four at the front; the Williams four at the back. But these two oddities did share commonalities beyond an excess of Goodyear contact patches. Both were born from frustration at their teams’ lack of an alternative to the Cosworth DFV engine, and both represented a search for that most coveted grail in motor racing, the “unfair advantage.”

“Derek Gardner [the P34’s creator] said he did it to reduce the frontal area, so as to give it better aerodynamic penetration,” says Dernie. “Well, that’s a complete misunderstanding. The frontal area isn’t the front of the car; it’s the area of front elevation. And if you look at the front elevation, it’s the rear tires that dominate, not the front. The fundamental principle on which the Tyrrell P34 was designed was a misunderstanding of the aero facts. While it didn’t do too badly, it was invented to solve a problem it didn’t actually address.”

Gardner isn’t around to defend his creation – he passed away in 2011. But did this veteran designer really misunderstand his challenge?

It’s true that Gardner’s speciality wasn’t aerodynamics. Before Tyrrell, he was a transmission engineer for Ferguson, the all-wheel-drive pioneer, and worked on the STP-Lotus turbine Indy car in the late 1960s. The genesis of his six-wheeled revolution dates back to this time, and he even pitched the idea to STP’s Andy Granatelli.

In Formula 1, Ken Tyrrell took a chance on Gardner’s big idea, but it is surely significant that the six-wheeler carried the Project 34 moniker, rather than the team’s established double-zero designation. This smacked of a calculated experiment, and driver Jody Scheckter had his doubts from the start. The South African, who’d joined the team as the retiring Jackie Stewart’s replacement in 1974, was already growing restless. Now this?

Today, 42 years after he last raced the P34, he’s still fairly nonplussed about the whole thing.

Like Dernie, Scheckter recalls the frontal area drag theory. “I’m not an aerodynamicist, but the back end was still the same size,” he says. “Was the car a little bit more efficient? Possibly – but possibly not. Because the back still had to go through the air.”

The four small wheels offered grip and handling benefits, but there was a theoretical aero advantage too. Conventionally sized front tires were always a literal drag for designers. By choosing a smaller diameter, then doubling them up on either side, they could be better hidden behind a full-width, 1.5m (4.9ft) front wing to improve airflow. But Gardner is on the record acknowledging that the fat rear Goodyears, identical to those on every other F1 car of the time, would have scotched the drag theory. Instead, he played up the grip benefits of the four 10in tires, commissioned in secret by Tyrrell.

The prototype, essentially the rear of a Tyrrell 007 attached to a novel front end featuring four miniature double-wishbone suspension units, was unveiled to an openmouthed media in Sept. 1975 (Tyrrell had always been good at keeping secrets), before testing at Silverstone and then Paul Ricard.

“We went down the [Mistral] straight [at Ricard] with the old car and the new car, and the six-wheeler was faster,” says Scheckter. “But Derek had put a narrower track on the back and the wing was slightly different, so the comparison was invalid from my point of view. I felt they were trying to prove it was better, regardless of whether it was or not. He could have had a theory that with a small front you also had a smaller back, I don’t know.”

If the thought had occurred, Gardner didn’t follow it through. In the spring of 1976, when the car was ready for its race debut, the usual bulbous rear Goodyears remained. The P34 dragster was radical, but never beautiful.

Still, it did work. At its first F1 race, the opening European round at Jarama, Spain, Patrick Depailler qualified a promising third – 11 places ahead of doubting Jody in a 007. That Depailler crashed out with brake problems was an early sign of a major P34 weakness.

Once Scheckter had his own six-wheeler, he and his French teammate proved that Gardner was possibly on to something. Most famously, Scheckter led home Depailler to a 12-wheeled one-two in the Swedish Grand Prix at Anderstorp – the only F1 win for a car with more than four wheels – and at season’s end they were P3 and P4 in the championship, admittedly way behind Niki Lauda’s Ferrari and new world champion James Hunt’s McLaren. It was, Scheckter admits, better than he remembered.

“Much more than I remembered, actually,” he says. “But it broke a lot. I remember going to Zandvoort and just thinking the whole time, ‘Is it going to break?’ And if it breaks there you don’t really get out of it. Austria, the suspension broke in the front and I had a massive crash. Sweden, in practice one of the small wheels broke off. They had to reset the alignment and cambers on the front nearly all the time because it was flexing so much. But I shouldn’t be so negative, should I?”

He at least confirms that Gardner achieved part of his target: “It was a fun car to drive; you could do anything with it. In a way, it was a short and long wheelbase car.” Despite an inherent weight problem, the complex steering system made it light to the drivers’ touch and its maneuverability shone on tighter tracks: along with their success at Anderstorp, Scheckter and Depailler were also second and third at Monaco, behind Lauda. 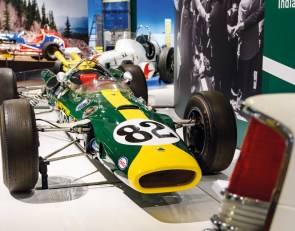