Attack Performance/Herrin Compound Yamaha’s Josh Herrin showed once again that if the conditions are iffy, he’s a difficult man to beat.

Herrin mastered the conditions today in a very wet Championship of New Jersey at New Jersey Motorsports Park, the Georgian backing up his victory from a few weeks ago in Pittsburgh with a textbook display of wet-weather riding that earned him a second Motul Superbike victory on the season. The win was the sixth of his AMA Superbike career and his first in the rain.

In typical Herrin fashion, he started quickly but was surprised after the first lap to have the lead that he did.

“I was scared,” Herrin said. “Warm-up lap, I was scared. Start of the race, I was scared. We got a really good start and I came across the start/finish line thinking I was about to get blasted by everybody. I looked back, which I never do, and saw a big lead. I was thinking, ‘well, maybe somebody is passing me on the right.’ I looked, no one was there. So it was weird.

“Both Pittsburgh and here were two races where at the start of the race I was sitting on the grid like a little baby complaining about having to race in the conditions that we’re racing in, and somehow I just pulled something out of my ass and go. I don’t know where it came from, but it was there and I’m not going to complain about it. I had a lot of fun. I hope it’s dry tomorrow because we had good pace on Friday.

Herrin beat Yamalube/Westby Racing’s Mathew Scholtz by 37.1 seconds with the South African backing off the pace at the end of the race when he saw the gap he had on Monster Energy/Yamalube/Yamaha Factory Racing’s Cameron Beaubier.

“I didn’t have the (tire) warmers on so I kind of knew the first three or four laps would be sketchy, but then I got past Cam (Beaubier) and Toni (Elias),” said Scholtz, who earned his second pole position of the season in the morning in Superpole session. “Josh (Herrin) was pretty far up. He pulled his usual trick of going out flying and he has a fire lit under his arse. So I tried to catch him. I had a few huge, huge moments. The bike just didn’t feel the same as the one in practice and in Superpole, so maybe we have to go back and look at what we did. But I’m just very happy to be back up on the podium.”

Beaubier was some 18 seconds adrift of Scholtz and in championship-winning mode, which meant he wasn’t taking any chances. Especially after having a big highside crash in the wet Superpole session. With Yoshimura Suzuki’s Toni Elias crashing out of third place, Beaubier has his hands on the title with a 72-point lead and only 75 points left on the table. He will likely earn his third MotoAmerica Superbike Championship in tomorrow’s second Motul Superbike race at NJMP.

“I don’t know if I’ve ever been this nervous going into a race,” Beaubier said. “The conditions are bad. I had crashed earlier and the last time I was out there I was laying on the ground in Superpole. So I just didn’t know what was going to happen in the race. My crash wasn’t a crazy crash. It wasn’t very big or nothing, but we ended up having to change the motor because the throttle got stuck wide open, just to be safe. So hats off to my guys for busting their butts and getting that changed in-between Superpole and the race, because there’s not a ton of time.”

Yoshimura Suzuki’s Roger Hayden passed Genuine Broaster Chicken Honda’s Cameron Petersen on the final lap for fourth. It was Petersen’s best finish of the year in fifth, just .116 of a second behind the Suzuki. Such was Herrin’s performance that Petersen was the last rider on the lead lap.

Beaubier now leads Elias by 72 points, 345-273, after his 15th podium finish of the season. Herrin is third, 20 points behind Elias. Scholtz is fourth, 43 points behind Herrin and 24 points ahead of fifth-placed Gerloff.

“I was pushing and catching (Mathew) Scholtz for second place,” Elias explained of his crash. “I was trying to gain extra points in the championship and ended up just pushing too hard.”

In Saturday’s Supersport race, Monster Energy/Yamaha Extended Service/Graves/Yamaha’s JD Beach clinched the 2018 Championship with his second-place finish and 12th podium in 13 races. For the Kentuckian, it was the second MotoAmerica Supersport Championship of his career.

Rickdiculous Racing’s Hayden Gillim notched the win on a wet NJMP track for his second victory of the season, and Quicksilver/Hudson Motorcycles’ Richie Escalante completed the Yamaha podium sweep.

“I’ve been working my butt off this year,” Beach said in reflecting on his championship year. “It’s been really good. We’ve been lucky at times and good at times. We put the whole year together. Today was stressful. One of my goals going into this year was to win in the rain. I really wanted to win the race, but once Hayden (Gillim) got by me, I knew that was out the window. So, I was just trying to finish the race. It was the longest race of my life. Being in the wet already takes forever. I was just counting out laps. We got to halfway and I was like, ‘we’ve got 10 laps to go?’ It feels amazing. We definitely still have some more racing to go. I still want to try and get some more race wins, so I’m kind of enjoying this for now but will get back to work tonight and really enjoy it after the season’s over.”

Gillim was happy with the victory, his second of the year and first since Road Atlanta in April.

“The race win at Road Atlanta was really good, and it was a win in the wet again for me today,” Gillim said. “Honestly, I want the races to be dry right now because I really want to beat these guys in the dry.

“It was a tough one today. JD (Beach) got a rocket-ship start like he always does. It’s tough to pass in the wet, especially at a track like this. It definitely was a little bit colder in the race, so the tires didn’t have as much heat, so we were slipping and sliding a whole lot more. It took some time to figure it out, but I was able to get by JD and then at that point it was just trying to stay focused. It’s so hard in the rain to stay focused. One little thing, you see a bird fly by and you get all distracted because you’re just going what feels like so slow. It was good. I was happy to get back up here for the whole Rickdiculous Racing team. It’s been a long time coming. Hopefully, we can go for it again tomorrow.” 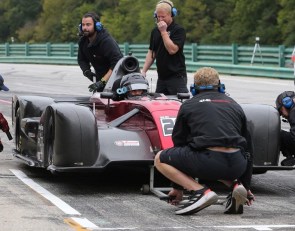