Steiner: F1 has no midfield anymore

Steiner: F1 has no midfield anymore

Haas team principal Guenther Steiner says Formula 1 no longer has a midfield, with all seven teams behind Ferrari, Mercedes and Red Bull capable of challenging for points.

In recent seasons there has been at least one team cut adrift at the bottom of the constructors’ championship, with Sauber scoring just five points last year and Manor and Sauber combining for a total of only three points in 2016. This season, Williams is currently at the bottom of the standings with four points but reached Q2 in Austria, while the next two teams above it — Sauber and Toro Rosso — have both scored top-six results.

“After testing, we were cautiously optimistic [fifth place] could be achieved, but it’s still a difficult task as all the other teams in Formula 1 are very good teams — there is nobody who is uncompetitive,” Steiner (pictured above) said. “There is not really a midfield anymore. It’s just ‘the rest.’ There’s the top three and then the rest.

“Everybody from fourth to 10th can be competing for points this year, as we’ve all seen. Now, being fifth, it’s nice to be there. After testing it was realistic to think we could be there, but we were very conscious that it would be hard work — and it is hard work, actually.”

Haas leads “the rest” at Silverstone. (Image by Glenn Dunbar/LAT)

Haas has had the fourth-quickest car at a number of races so far this season but failed to convert that performance into significant points on a number of occasions. Steiner says those missed opportunities are frustrating — despite a return of 32 points over the past three rounds — but also provide him with confidence that beating Renault to fourth in the standings is a realistic proposition.

“I would say it is satisfying, but it isn’t. We could have had a lot more points, and we missed out on them. We need to make sure that we are not keeping on missing points, because these are the points we will miss at the end to finish fourth.

“I think with the potential of the car we have shown over the last three races, it is possible to aim for fourth. If we achieve it or not, that’s a different question. I don’t want to be arrogant and say we will finish fourth, because by no means is it a given. We are competing with three very strong teams for this position. We will try, we will give it our best and, hopefully, we end up fourth.” 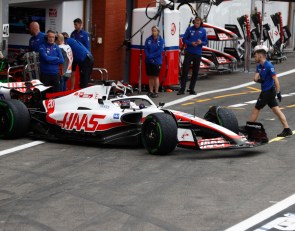 Steiner believes Haas ‘in a better place’ for 2023 car