This is what Rick Hendrick and Jeff Gordon always envisioned: Gordon no longer a driver, but still a vital part of the Hendrick Motorsports operation.

“Always thought he would the guy,” Hendrick tells RACER. “I wish he was there full-time. I wish he was there all the time, but he’s doing a great job on TV and he wants to spend time with his family. He gives us a lot of time, but I’ll take all of Jeff Gordon I can get.”

Gordon retired from the NASCAR Cup Series at the end of 2015 after 23 seasons as Hendrick’s main man. Since hanging it up though, Gordon has transitioned comfortably from wheelman to television broadcaster, but he is still heavily invested in HMS as a minority owner, mentor, and consultant. He is giving back to the company – and the man – who made him.

“Part of my vision was that I’d hope I’d have a long career where one day I could, on my own terms, step away from driving, and I knew 10 years ago that I liked the business side and I needed to learn more about it,” Gordon tells RACER. “So, I guess I always felt like, when that day comes when I step away, then I want to get more involved and I look forward to that challenge. Over the last three years, that has definitely taken place.

“Right now, I’m trying to juggle a few different things, but I’m enjoying what I’m doing and there’s time when I wish I could be there more for Rick and HMS.” With a laugh he adds, “there’s other times where I don’t know that I’m quite ready for that.”

Neither Hendrick or Gordon can point to a specific timeframe or event where their relationship morphed from driver and owner to family-like: Hendrick says that he goes back and forth between looking at Gordon as a son and as a younger brother. The easiest answer for both is that it happened naturally over time.

But Gordon does admit he immediately looked up to Hendrick after being hired in the early 1990s, and was impressed by how Hendrick carried himself; how respectful he was. The more time Gordon spent with Hendrick, the more Gordon wanted to be like him. Plus, there was something striking about the balance Hendrick had between working hard and spending time with family. Success on the track also went a long way in bringing the two together.

Gordon and Hendrick celebrate after winning the 2001 Brickyard 400. Image by LeSieur/LAT

“So those experiences, especially the championships when you go to back then New York and you’re at the Waldorf and you’re on the stage, that’s just a unique experience that only that team [gets].”

Off the track, there were many personal moments that showed the loyalty the two had for each other. When Hendrick was diagnosed with a form of leukemia in late 1996, Gordon was “there for me”, he says.

When Gordon went through a nasty divorce in 2002, it was Hendrick whom he leaned on, and even spent some time living with. Together, the company banded around each other and the Hendrick family when a 2004 team plane crashed, killing all 10 people on board, among them Hendrick’s only son, brother and nieces.

“Well, Rick’s a very loyal guy,” Gordon says. “In the people he has worked for or worked with for many years, that’s kind of his own code, and so when other people show that in more than just business, I think that carries a lot of weight.

Even business matters between Gordon and Hendrick had a personal touch. While there was always an individual who needed to draw up the contract, the two always came to terms of a new deal on their own. Gordon recalls how in every instance before the deal was done they would sit and go over what each wanted, and they were “always willing to compromise.”

“The thing I can say about Jeff Gordon, we never had to have a lawyer to negotiate our deal,” Hendrick says. “We could do it with a handshake. He knew he could count on me, and I knew I could count on him.”

Says Gordon: “When you deal with someone on that level and you can still be friends and can laugh about it and talk about it, and then you have a successful business relationship, that definitely keeps you close. It’s funny that he mentions that, because we do talk about that sometimes. And now, whether it be Jimmie Johnson or Alex Bowman or Chase Elliott or William Byron, I always say to them, I don’t know where you’re at in your negotiations with Rick, but I highly recommend at some point you sit face to face with him and tell him what you want. That’s what I think worked so well for us, and built a strong bond and got the deal done.”

No matter what it is, Hendrick says he can ask Gordon to do anything. He calls Gordon “perfect as you could ask for” and describes him as “special people.” Gordon, he says, can do anything he wants – skiing, television, hosting Saturday Night Live or co-hosting Live with Regis and Kelly. And yes, Hendrick laughs, even dance.

The amusing thing listening to these two Hall of Famers talk about their relationship is that while they have plenty to say, both struggle when asked pointedly: what does the other mean to you? It’s clear both are happy still being able to work together and the respect level among them, somehow, continues to grow even after over two decades together.

But this is what both Hendrick and Gordon expected. The only question left is how much more will Gordon end up doing at Hendrick Motorsports? For now, at least, Gordon says he’ll remain involved for as long as Hendrick is, too.

“It means too much to me,” Gordon says. “It is like family. Every opportunity you see me doing is because of the relationship with Rick and Hendrick Motorsports. That and NASCAR and the commitment my parents made to racing. That’s what gave me all this opportunity. I’m going to make the most of it.

“Funny thing is, Rick thought it would be a good idea if I did TV, so here I am doing TV and now he’s like, you know what, can we have you over here full-time? It’s something we talk about a lot ­– and I never say never.” 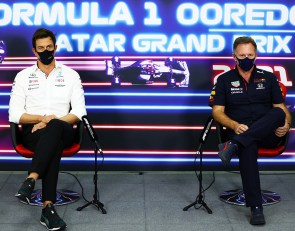