The GTE Pro class at the 2018 24 Hours of Le Mans produced a dream result for the Porsche GT Team, finishing 1-2 on the 70th anniversary for the brand. The No. 92 ‘Pink Pig’ liveried 911 RSR took a comfortable victory, the car benefiting from a safety car period earlier in the race, and running almost a lap ahead of the rest of the 17-car field of factory cars.

Michael Christensen, Kevin Estre and Laurens Vanthoor were superb throughout and didn’t put a foot wrong all race in pursuit of history. The win marked the first for the 911 RSR in a 24-hour race and first in the WEC.

Making it a 1-2 was the other WEC-entered 911 RSR (in Rothmans-style colors for the race) of Fred Makoweicki, Gianmaria Bruni and Richard Lietz, which had the raw pace to win but in the end, spent much of the second half of the race desperately trying to secure second rather than gun for the win.

“We’re absolutely delighted that we were able to come out on top in this fierce competition against five other automobile manufacturers after starting from pole position. These two wins underline once again why Porsche is a record-holder at Le Mans,” said Dr Frank-Steffen Walliser, Vice President Motorsport and GT Cars. “No other marque has secured as many successes at the world’s toughest long-distance race and is as closely linked to the legend of Le Mans as Porsche. 2013 marked the last time Porsche celebrated a double victory with the 911 RSR.”

The car had to really push hard, especially in the closing stages of the race, when the No. 68 Chip Ganassi USA and No. 67 Chip Ganassi UK Fords were all running together, fighting for a finish on the second step of the podium.

Ford was unable to prevail, though, and the No. 68 2016 Le Mans-winning line-up of Joey Hand, Dirk Muller and Sebastien Bourdais finished third, denying the No. 67 Ganassi UK GT of Andy Priaulx, Harry Tincknell and Tony Kanaan a podium.

LM24: Bourdais lashes out after clash with Makowiecki

GTE Pro was easily the most entertaining class of the race, with countless sequences of close racing throughout, between most of the marques involved. The BoP debate was certainly put to one side during this one. It was by no means perfect, but it did produce great racing.

Of the other factories involved, BMW impressed the most, on the Le Mans debut for MTEK and the M8 GTE. Both the Nos. 81 and 82 were in the mix once the race settled down, and climbed into the top three for a long stretch during the middle portion of the race. Unfortunately, though, the No. 82 retired after Alex Sims’ off at the Porsche Curves and the No. 81 dropped down the order after a broken damper and radiator leak and finished 12th in class.

AF Corse had yet another underwhelming run for Ferrari, the team’s three cars in the mix for top-five finishes, but never for the overall race win, too many mistakes costing its driver crews dearly. Its highest place 488 by the end of the race was the guest-entered No. 52 car of Toni Vilander, Antonio Giovanazzi and Pipo Derani, which crossed the line sixth, and three laps down.

Corvette Racing, too, didn’t quite have the pace but its No. 63 C7.R did have a strong run to fifth in the class, making up somewhat for the No. 64, which suffered reliability woes throughout and retired after 259 laps.

“It was a really tough race against tough competition,” said Jan Magnussen, who last won his class at Le Mans back in 2009. “The car felt really good from Sunday morning onwards, but during the night it was tough. It would have been a different race for us had the safety car situations panned out differently, but that’s how it is and there’s nothing you can do about it.”

Then there was Aston Martin Racing, which despite two BoP breaks endured a tough 24 hours, its two new Vantages barely having the pace to run ahead of the GTE Am field. The No. 95 did however run reliably all race, and finished ninth. But it was a small consolation prize for having to fight with what was clearly a poor hand dealt to the brand-new car by the organizers. 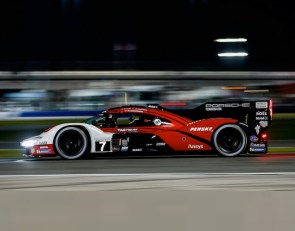