Your questions for Robin should continue to be sent to millersmailbag@racer.com We cannot guarantee we’ll publish all your questions and answers, but Robin will reply to you. And if you have a question about the technology side of racing, Robin will pass these on to Marshall Pruett and he will also answer here.

Q: Hopefully no one will ever mistake Will Power’s introvert nature for lack of emotion ever again! The images speak for themselves. About the race itself, more like a pre-2012 500, but that’s OK. My whole group thought it was great, but I won’t be surprised if Dallara looks into ways to reduce the wake a little bit.

I really wanted to write to make sure Oriol Servia is given some credit for his race. I’ve been to 15 500s now, and his performance was easily the most exciting I’ve seen — I don’t know how many cars he passed on the outside in Turns 3 and 4, but it was a lot. At one point he went three-wide through Turn 3 and passed the two inside cars – it was amazing and not something I’d ever seen. Hats off to Oriol, and of course Will.
John in Dayton

RM: As I wrote Monday, Will’s quiet demeanor is mistaken by some for arrogance and others as indifferent, and he’s neither. He’s about as passionate about racing as I’ve ever seen. Last Sunday was my 50th Indy 500 as a reporter and I can’t remember a more demonstrative winner. And it wasn’t an act, he really was that excited about finally winning the only race that truly counts. And I feel bad we didn’t give Servia more love, but I didn’t see a lot of the passes you were describing because of, well… you know why.

Q: Really enjoyed the podcasts over the course of this month, but I feel obligated to share my thoughts on the post-race podcast. I couldn’t disagree with you guys more on your thoughts of the race. I thought it was one of the toughest days these guys have had in decades. I really couldn’t believe your comments about “the show” – I HATE that term. I get that motorsports has gone off towards the entertainment biz direction, but let’s be real here for a second. Every time these drivers strap in, they are risking their lives. I don’t know about you, but that isn’t a “show” to me.

As for the race and outcome itself, just look at Will. He was not only over the moon about winning, I suspect a LOT of that emotion came from how difficult the race was. That was probably every single driver’s toughest day in a car! How could it not have been?

As for the on-track action, sitting in Turn 3, the action was enough to keep me from relocating during a caution period (which I do every year!). Late restart, five-wide heading in, and they all made it! Unbelievable. But, when that is happening every few laps like in prior years, it became less exciting because of its frequency. Trust me, as a life-long attendee, the race is MUCH better when things happen organically. And not every five laps! That, to me, is way too manufactured.

Will Power won, in my opinion, one of the toughest Indy 500s of all time. I don’t feel that calling it “one of the worst 500’s” is fair. That was one rough race. And that win was ALL driver, ALL day.

RM: I appreciate your point of view, and the Mail this week is about 50/50 in terms of some people like yourself loved it, and others thought it was too boring. I went back and listened to our podcast, and I said the restarts presented much of the overtaking opportunities (like usual), but we’ve been spoiled the past few Mays with the non-stop passing. To your point, the Hanford Device was manufactured racing, and Alex Zanardi hated it but the fans loved it. What we saw last Sunday was a very tricky 500 miles, and again to your point, with the heat it may well have been one of the toughest Indy 500s. Rahal, Rossi and Servia managed to find ways around people, so they were rewarded for the most part, and I would have liked to have been able to stand in a corner and watch them. I’ve seen a lot worse Indy 500s than this one, and we’ve been spoiled the past few years, but there was still enough drama at the end to keep you folks entertained. 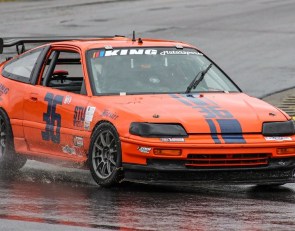