The 1968 Indianapolis 500 will forever be remembered by most as the race where the turbine failed for the second straight year – just a few miles from the checkered flag.

But the untold stories were the dominance of winner Bobby Unser, and another strong run of Lloyd Ruby that ended in frustration.

A year after Parnelli Jones came within six laps of winning in Andy Granatelli’s turbine, the bombastic owner with STP sponsorship returned with a three-car armada of turbines.

Joe Leonard won the pole at a record speed of 171.559 mph and teammate Graham Hill sat next to him, with Unser rounding out the front row in his conventional Offenhauser engine.

And while Leonard was leading with 10 laps to go before breaking down, he hadn’t driven away from the pack like everyone expected. Unser and Ruby were quicker most of the afternoon.

“I thought I could run with them [turbines], but honestly I didn’t think I could out-run them,” said Unser on the 50-year anniversary of his first Indy 500 triumph. “But of course I didn’t know the mistake they made before the race started. And that changed everything.”

Unser claims (and it was confirmed by Leonard before he passed away last year) that instead of sticking with the aviation fuel that the turbines qualified with, Granatelli switched to gasoline after getting $100,000 from Standard Oil.

It was big money for those times, but turned out to be costly.

“That cost Joe and the other cars [Hill and Art Pollard] horsepower,” said Unser. “And I knew early in the race I was faster than him, but I didn’t know why.”

On Lap 8, after Leonard led the first seven circuits, Unser passed him on the main straightaway (“I waited because I wanted to do it in front of Andy,” he laughs) and proceeded to drive away to a 6.0s lead.

“I purposely stayed behind him [Leonard] the first few laps because I wanted to see how my car was handling,” he said. “Then I thought, ‘this is stupid,’ so I went around him and then waited on him to come storming back by because I figured I’d pissed him off. But he started getting further away in my mirrors, and I wondered what the hell was going on.

“He wasn’t standing on the gas, at least I didn’t think he was, and I couldn’t figure out why.”

The pivotal point of the race came on Lap 162. Unser lapped third-placed Leonard, and was about to do the same to Ruby when he pitted for the third and final time on lap 166. But his transmission had eaten all but fourth gear and it took forever to get back to speed, so he re-entered the race in third place.

On Lap 174, Ruby held a two-second lead on Leonard and six on Unser when the coil failed on his Gene White Mongoose and he crawled into the pits. When Carl Williams pounded the wall and caught fire on lap 183, the field slowed and there were five lapped cars between Leonard and Unser.

When the green waved for the final time on Lap 191, Leonard accelerated but nothing happened, and he coasted into the Turn 1 infield with a busted fuel shaft while the crowd roared as Unser resumed command.

“I really didn’t need that caution because I knew I would have caught Joe, I was just that much better,” said the three-time Indy winner who finished 53 seconds ahead of runner-up Dan Gurney, the man he would win number two for in 1975. “Ruby gave me a hard time all day, and I really had to work to out-run him.

“Joe would have been unbeatable if they would have left the fuel alone. But they didn’t, and it turned out to be my day.” 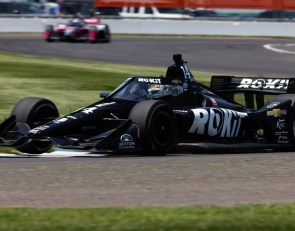