Starting from the pole position in his Verizon Chevy, Power lost the lead to Robert Wickens during the middle part of the 85-lap race around the 2.439-mile road course when Wickens, on red tires, passed the Team Penske driver (on primary black tires) on Lap 42 and built up a five-second advantage.

But Wickens had to go to blacks on his Lap 41 pit stop and Power came in one lap later and bolted on the softer, faster-optional Firestone tire. Power passed Wickens for the top spot as they braked into Turn 1 on Lap 51 and that turned out to be game, set and match for the Aussie veteran.

With this 👇 pass @12WillPower takes the 🥇 lead!

“When Wickens was on reds and I was on blacks, I’ve never driven so hard to watch a gap grow,” said Power, who has won three of the five Indy Grand Prix races and two in a row. “But then I got to go on reds and he was on blacks and saving fuel and I knew I had to pass him.

“I’ve never driven so hard for an entire race, I was 100 percent all of the time and I’m exhausted.”

After scoring his 33rd win, Power was asked about winning No. 200 for The Captain.

“It’s a real honor to drive for Roger and and to be given the equipment week and week out and I can’t thank him enough for the opportunity he’s given me.”

Josef Newgarden’s spin on Lap 56 gave everyone a final pit stop under caution, and everyone put on red tires. But during the closing 24-lap sprint to the finish Power was able to keep Dixon behind him.

“I know how good Dixon is at saving fuel and going fast so it was good to see the checkered flag,” Power said.

Dixon, who qualified 18th in his Chip Ganassi Racing Honda, also used good strategy and red tires to get around Wickens and push Power to the finish.

“Well we always come to win but to go from 18th to second, obviously it was a good day for us,” said the four-time IndyCar champ.

Wickens fought off Alexander Rossi to keep the final podium spot, and Sebastien Bourdais got around Rossi to come home fourth.

“It was the first time in my career I’ve had to save fuel like that,” the rookie from Canada admitted. “I’m a little bit gutted, but I’m really happy we didn’t run out of fuel.

“They were giving me a number, and I wasn’t able to hit it. And they were like, ‘We need this,’ and I’m like: ‘I’m trying. I’m just not getting the number.’ We had to go even past that because I wasn’t able to save enough at the beginning. It was a stressful afternoon. I was really happy in the first couple of stints. But that final one with the fuel savings kind of blew it wide open.”

Josef Newgarden recovered to take 11th place and still leads the Verizon point standing by two over Rossi heading into the 102nd Indy 500. 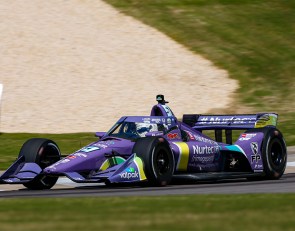