It had been over a decade since the driver who started in P1 on the southern Californian street circuit had finished in the same position, but Rossi didn’t get the memo: He led 71 laps, nailed every restart, and never at any point appeared to be under any real threat.

“Man, this Andretti Autosport team … its unbelievable,” said Rossi. “I can’t put into words how good the car was all weekend and I’m so glad we capitalized on that and that nothing crazy happened. Restarts were good all day; our drive out of T11 was awesome. The only thing I was worried about was that [Will Power] had more push-to-pass [at the end] so we had to manage the gap a little bit. It’s a really special feeling.”

Power, as Rossi alluded, was the only potential obstacle to success for the No.27 late in the race, not least because he had almost twice as much push-to-pass remaining after the final restart eight laps from the end. Power used it liberally, but to no real effect.

“Man, I was absolutely driving as hard as I could go,” said the Team Penske driver. “I’m sure he was going as hard as he could go. The Honda was just a bit better out of the hairpin; we couldn’t get close in Turn 11. I thought I might have a chance but the thing is with this P2P system is that you can use two or three seconds and really look after it and get almost the same benefit as using it all the way down the straight.”

The order behind the top two was dictated in large part by the timing of a late yellow that sent a bunch of top-six contenders tumbling down the order, with a group who’d been fighting in the mid-pack vaulting up in their place. And beyond that, it was determined by some handy defending from Ganassi’s Ed Jones, who withstood immense pressure in the final laps to claim the final place on the podium. 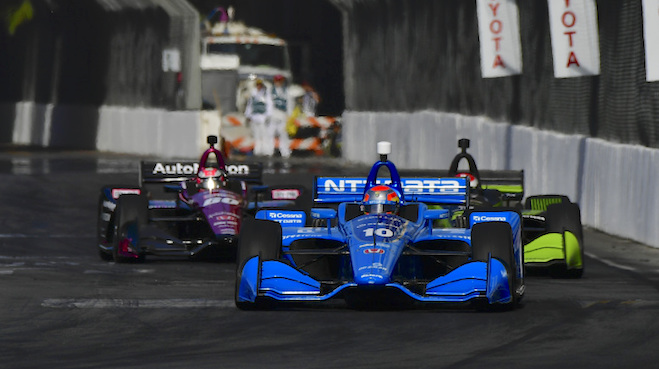 “We didn’t have a great qualifying and knew we had to do something a bit different with strategy and get a bit lucky with the yellows, but I can’t thank the team enough,” he said “I feel like I let the team down a bit last time out in Phoenix [with a crash] so it’s great to come back with a podium.”

Most of that pressure came from Andretti’s Zach Veach, who was nonetheless delighted with fourth, while Graham Rahal had an eventful run to fifth. His day had started with a penalty for avoidable contact when he tapped Simon Pagenaud into the barriers at the first corner (below), earning himself a penalty that dropped him to the back of the pack. He spend the bulk of the afternoon in recovery mode, and had worked his way back up to the outer fringes of the top 10 when the yellows played into his hands.

“Sorry for Simon,” he said. “That’s not the way we like to do things. It was just like St Pete – the rears locked and I barely made the corner. But it hurt my race too, getting the penalty, going to the back, and having to battle our way through. We were the one car that maybe had a shot at Rossi today. I’m disappointed at how the day started, but proud of how we finished.” 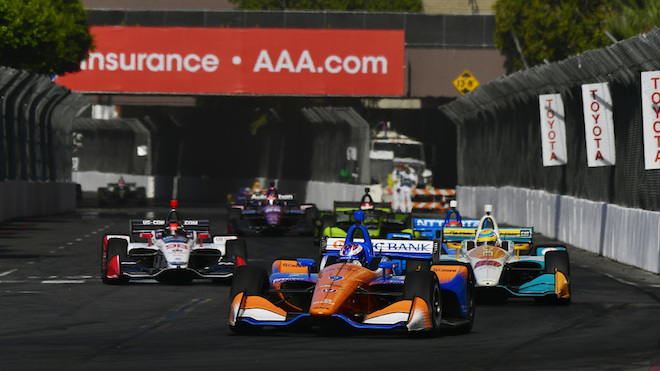 Pagenaud, meanwhile, was doubly stung. Not only had he been tipped into the wall, but the damage would have been repairable if the car could have been returned to pitlane.

“Felt like [Rahal] never broke,” he said. “It’s a shame. The car was totally repairable, we just needed to change the toe-links and we can go back out. It could prove to be costly for the championship. Great shame; we had a really good car this weekend. I don’t know what else we could have done. My race is done; I didn’t even make one corner. I had the car to win the race today. I don’t think [a drive-though] is going to fix my pain or my team’s pain.”

Marco Andretti was sixth, with Josef Newgarden – one of the few early front-runners to opt for a three-stopper – Tony Kanaan, James Hinchcliffe and Charlie Kimball rounding out the top 10.

Tales of woe? There were many. Scott Dixon was convinced that he had a good enough car for the top three, and his pace during the first half of the race suggested that he was probably right. But those hopes were shot when Ganassi pitted and serviced him under yellow, earning him a penalty that eventually left him 11th.

“I think there was a bit of confusion,” he said. “First of all, we shouldn’t have been hanging ourselves out to dry; we were under no pressure, it made no sense. The only possible thing that could happen was what happened – you shoot yourself in the foot and go to the back. But the penalty from IndyCar was legit. It’s frustrating, the car was fast but probably too loose all day; we couldn’t get the power down. But we should have been on the podium.”

Prior to the penalty, he’d been engaged in an entertaining battle with Sebastien Bourdais, who pulled off what initially looked like a contender for pass of the year when he went three-wide to go around Dixon and the lapped car of Spencer Pigot, and then dived past Matheus Leist as well for good measure.

But in doing so he crossed the pit exit line, prompting a call from race control to hand the position back to Dixon. He did – and then passed the Ganassi Honda again at exactly the same spot on the following lap. He was subsequently caught out by the yellows, which dropped him a little deeper into the pack, where he was punted into a spin and suffered wing damage while chasing Kimball for ninth. He eventually crossed the line 14th, earning the tiniest of consolations when he was promoted to 13th ahead of Leist after the race when the latter was penalized for blocking.

Still, Ryan Hunter-Reay would happily have traded places with him. Quick in the early laps, the Andretti pilot found himself dealing with an array of niggling problems – a dinged front wing here, a puncture there – that trapped him towards the back of the field.

It was a similarly miserable day for Robert Wickens, who spent the afternoon wrestling with an apparent gearbox problem, while a potential top 10 for ECR rookie Jordan King was derailed by brake issues.

Other than Pagenaud, the only driver to find the wall was Zachary Claman De Melo, who crashed by himself on lap 60. 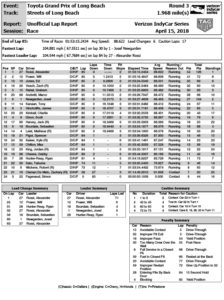