Daniel Ricciardo says his victory in the Chinese Grand Prix shows how “crazy” Formula 1 is after he nearly missed qualifying on Saturday.

Red Bull faced a race against time to replace Ricciardo’s power unit after a turbo failure during FP3, with the team getting him on track with one minute to spare in Q1. That came just a week after Ricciardo retired on the second lap of the Bahrain Grand Prix, and he admitted that he was not expecting to take part in qualifying such was the tight timeframe.

Asked what he would say if told Red Bull would win a race before Mercedes in 2018, Ricciardo replied: “Good job. Yeah, pretty cool. Holy Testicle Tuesday!

“I don’t know. I’m sitting here, reciting everything in my head what just happened. Yeah, awesome. Even after yesterday.

“I’ve only got six – it’s not a whole lot but the wins always seem to come under some circumstances. Baku, and this one now where we really thought we were going to start the race at the back.

“We didn’t think we were going to get out in qualifying and, just over 24 hours later, now to be here, it’s… this sport’s crazy. A week ago I was with my head down after two laps on Sunday. Yeah, frustrated at the sport, frustrated at all the variables that are involved in the sport. 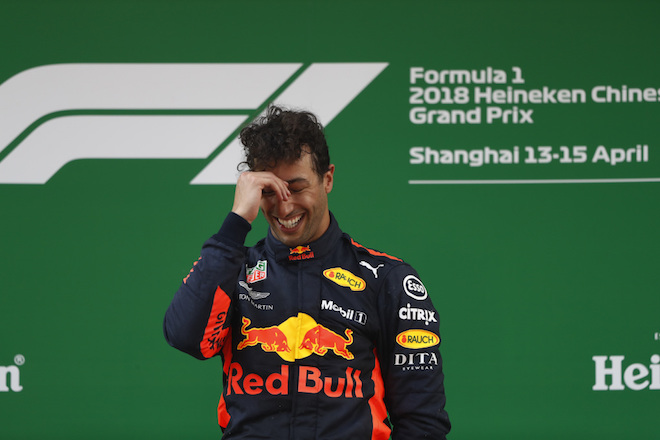 “Sometimes I question why I chose this sport because there’s so many other things out of your control and it does get you down a lot – but then when you have a day like this it’s worth 50 of those bad ones.”

Ricciardo made the most of fresh tires after a Safety Car period to climb through from sixth to win, with his pass on Valtteri Bottas for the lead particularly close as the pair fought into Turn 6.

“Opportunity be knocking! That’s what I would say. I could tell that obviously we had the advantage coming in at the safety car and having those softs. I sensed the opportunity. Initially it was ‘OK, maybe now we can fight for the podium’ and at the rate that we were going through the field, and I could feel the tires were holding on well, then it was obviously fully set on the win.

“Obviously I had pace over all the guys that I got ahead of but you still don’t want to sit behind for too long. I saw Valtteri defend but I was kind of committed already from Turn 3 that I was going to try.

“It was cool – it was close but I would say close but fair and it’s cool when you go wheel-to-wheel and I think it’s fun for drivers and it’s good TV, so I enjoyed it. It makes it a bit sweeter than just maybe cruising past on the straight, so that was a lot of fun.”