A conglomeration of old school, former partners, an Indy Lights regular and a man with ties to Formula 1 have put together a team to run James Davison in next month’s Indianapolis 500.

As first reported last week by RACER, Davison will technically be in A.J. Foyt’s third entry for the 102nd running but it’s a completely separate operation chocked full of racing history.

“We weren’t going to run a third car this year and just concentrate on No. 14 (Tony Kanaan) and No. 4 (rookie Matteus Leist) but the people they’ve put together just made sense for us to do it,” said Larry Foyt, the team manager/president for ABC Supply Racing.

David Byrd, whose father Jonathan began sponsoring Indy cars in 1985 and teammate with Foyt in 1994 to run John Andretti, approached Davison after his impressive drive in last year’s Indy 500 and they began working on 2018.

“I started to talking to James in the garage right after the race was over and it’s really cool how everything has come together,” said Byrd, who fielded Indy cars for the late Bryan Clauson and is running USAC sprint champion Chris Windom in the Lights’ show at IMS.

Brad Hollinger, a Pennsylvania native who operates Vibra Health Care but also owns 23 percent of Williams Grand Prix Holdings, took a liking to Davison and is one of his backers along with Byrd and Brian Belardi.

Belardi, whose cars have won the Freedom 100 twice, has always wanted to be involved in the Indy 500 but was waiting on the right opportunity.

“I wanted to get my feet wet before I jumped into the deep end and this just seemed like the perfect opportunity,” said Belardi.

Longtime team manager Steve Moore, who led Kanaan’s effort at KV Racing to capture the 2013 Indianapolis 500, has assembled the crew, which also includes veteran engineer Kyle Brannan, who worked with Davison in 2014 at Indianapolis. 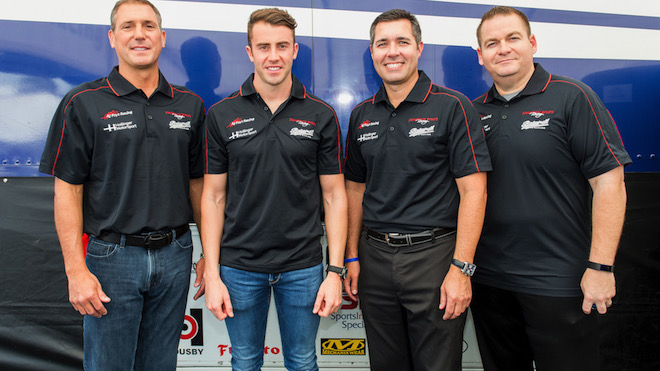 After Sebastien Bourdais was seriously injured last May during qualifying, Dale Coyne called in Davison to substitute and after starting 33rd, he charged to the front of the field to lead two laps before crashing.

“I could have settled for fifth or sixth but this was a career-changing opportunity so I went for it,” said Davison. “This business is all about getting breaks and I think that was a big one and why I’m getting this opportunity.”

Davison’s entry brings the total to 35 cars – 19 powered by Honda and 17 by Chevrolet.