Like Schmidt Peterson Motorsports’ Canadian phenom, Derani spent his formative years in open-wheel racing and, as opportunities to move higher disappeared, turned to sports cars to keep his career on an upward arc.

Wickens’ starring turn in the DTM with Mercedes solidified his craft to point that he’s been able to turn the Verizon IndyCar Series on its head in the opening rounds. And with his knack for winning the biggest IMSA WeatherTech SportsCar Championship races as part of the Tequila Patron ESM prototype squad, including the recent Mobil 1 Twelve Hours of Sebring, Derani is hoping IndyCar team owners continue to look outside the usual pool of drivers to find the next Wickens. 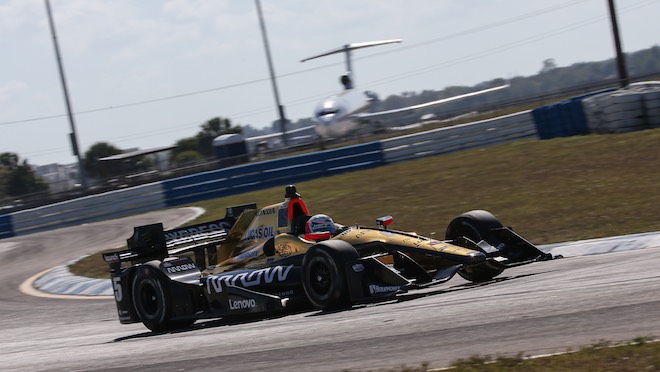 “I’m very happy in endurance racing, but IndyCar is the one place I’ve wanted to race that I keep looking to,” Derani told RACER. “I tested last year, around this time, with SPM (pictured above) and I loved it. And that was with the old bodywork. I think with the new bodywork, it will fit my style even better because in sports cars, in GTs, or like the Nissan DPi, going quickly with a slippery car is part of the expectation.

“I see what Robert Wickens is doing and it’s the same direction I’ve been on. He was very good in formula cars, went to DTM and was just as quick, and today, he’s making all the news in IndyCar. I look at what he is accomplishing and believe I can do the same.”

In addition to going for back-to-back wins with the ESM team, Derani plans on using the Long Beach weekend to make new acquaintances in the IndyCar paddock. Having tested for SPM and driven for the Ford Chip Ganassi Racing team – earning a podium at the 24 Hours of Le Mans – Derani will look to meet the rest of the teams between WeatherTech Championship sessions.

“I didn’t do the full IMSA schedule last year because I was also racing in Europe, so this will be my first IndyCar and IMSA weekend together, and I will do a lot of walking around and meeting [IndyCar] team owners and introducing myself,” he added.

“I like what I see with the new young drivers like Pietro Fittipaldi and Matheus Leist, who are also from Brazil. And then Tony Kanaan is like the example for all of us. I’m 24, so that’s around the same age as some of the rookies, but I feel older because I’ve been doing so much racing for factories and many teams. I hope it’s a good weekend for me and we can win the IMSA race and I can start some new relationships.”