The speeds dropped off during Friday night’s final lndyCar practice at ISM Raceway but a couple of the slower qualifiers might have found some hope for Saturday night’s Desert Diamond Phoenix Grand Prix.

And while they were the only two drivers to crack 179mph, it was still almost eight miles per hour (and a second) slower than qualifying speeds which were turned in during the heat of the day.

Tony Kanaan was third best at 178.714mph in the ABC Supply Chevy, followed by Alexander Rossi at 178.234mph in an Andretti Autosport Honda and Gabby Chaves at 177.142mph in the Harding Racing Chevy.

There were no accidents during the 70-minute session, although Spencer Pigot brushed the wall late in practice and did minor damage to the top of his Fuzzy’s Chevy. 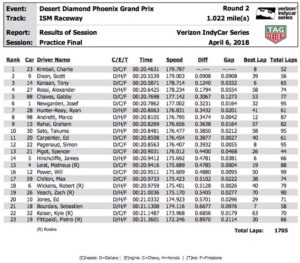